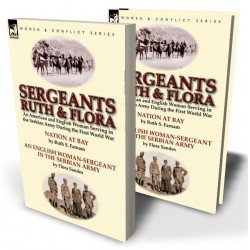 An English and American woman in arms during the Great War

Accounts of woman who don the uniforms of soldiers to take their place in battle have always fascinated students of military history. In modern times most of the world’s armed forces include women—not uncommonly engaged in combat roles, but in earlier times women who wanted to fight had to disguise themselves as men and keep their true identities secret. The First World War changed most of the rules of warfare, not least of which was the desperate need for all those involved to shoulder a share in the conflict irrespective of gender. The more desperate the plight of the protagonist, the more likely women would be found making a vital contribution. This time of crisis not only engaged women but highlighted their essential position in society and the undeniable extent of their capabilities. Once that door was open there would be no closing it and the status of women was changed forever in western society. The two women whose personal accounts are included in this book offered their services to Serbia, one of the hardest pressed small countries to be embroiled in a war that would destroy great nations. Each story is a riveting one of resolution, courage, perseverance, commitment and suffering by women with high morale principles. This unique good value Leonaur edition is highly recommended.
Leonaur editions are newly typeset and are not facsimiles; each title is available in softcover and hardback with dustjacket.

Our car was turned through a gap in the hedge and we rolled into a level field. Before us we saw a tent into which stretchers holding motionless forms were being carried. This was the dressing station nearest to the Serbian line. Within the tent soldiers with their wounds dressed lay upon the bare ground, at best with only a handful of straw under them and still in their ragged and soiled uniforms.
There were no ambulances up there and the wounded were brought in from the battlefield on stretchers carried by two men. We saw also a curious contrivance of two large wheels with a sort of stretcher hung from the axles. This could be managed by one man, though as it jolted over the stony ground the wounded man would groan in agony. Every time a man would cry out Colonel Sondermayer would flinch and his eyes grow dark with pain. When he spoke to or examined men in the tents he was like a tender father. The soldiers adored him.
After half an hour we went on to an inn on the other side of the village, and here I was presented to the commander-in-chief of the Serbian Army, Voivode Mishitch. Not tall, rather lightly built, this wonderful soldier does not impress a stranger with a sense of power until one meets the full, direct look of his eyes. Then one sees that here is a man. Calm, impersonal, his look bores into one’s inmost being, and I should not care to see him angry—with me at any rate.
He was much interested in hearing of my work and asked if I wanted to go yet nearer to the battle line. To my emphatic affirmative he said, “We will see what can be done,” and after we had had coffee. Major Todorovitch, his aide-de-camp, was sent for, given his instructions, and we bade the Voivode “au revoir,” climbed into our faithful car and started again toward the roaring guns.
Just outside the village stood a group of captive Bulgarian officers, whose guards saluted us, grinning with triumph as we passed. About a mile further on we saw eight hundred or more Bulgarian prisoners in their earth-brown uniforms standing in groups by the roadside or bathing their feet in the ditch. The Serbian guards were sharing their scanty store of tobacco with these men and, remembering the horrors of the Bulgarians’ treatment of Serbian prisoners and wounded upon the battlefield, I could only wonder at their charity.
In the almost demolished villages we saw ragged, haggard women winnowing corn, tossing it in the air with weary gestures, while near them sat the pale, emaciated children who had forgotten how to romp and play,—whose only thought now seemed to be “when shall we get something to eat?” I picked up a little child and tried to fondle her, but she shrank away and began to wail in a feeble, frightened way and I had to turn her over to her mother for comfort. Further along the road a little girl lying on the low bank smiled at me, but her yellow skin drawn over the sharp bones told a tragic story. I stopped the car and went back to see if I could do anything, but when I spoke to her she did not answer. I took her in my arms but she was already dead. “What was the trouble?” I asked.
“She was my child. She had great hunger,” the mother replied simply. I gave the mother some cakes of chocolate, which was all I had with me, and some money, but the low voiced “Fala” of these wretched people was so hopeless that the tears ran down my face and I felt that my heart would break.
Now the road was over rough undulations of ground, brown and sterile in appearance and with low mountains rising before me. Suddenly Major Todorovitch turning, cried, “Look!’—and far up in the blue sky I saw a flash of silver as the sun glinted on a wire or a wing. Behind it in the clear air grew suddenly three tiny, fleecy puffs of cloud—then three more—and three more. The plane must have been “burning the wind,” as it was not visible to us for more than five minutes altogether, and we had seen it as soon as it lifted over the mountains before us. It was a Serbian machine and the lovely, soft cloudlets were the deadly, exploding shrapnel with which the enemy batteries were pursuing it.
Down the hillside came a string of mules, each laden with a sort of pack-saddle holding two rude chair-shaped structures and in one of these on either side sat a wounded man. Other wounded men began to meet us, some with roughly bound up heads and with streaks of dried blood on their faces; some with arms in improvised slings and one boy who limped by with a bandage around one leg and blood dripping from it to the dust.
Where two stones, rudely set in the earth, marked a boundary. Major Todorovitch saluted.
“Madame,” he said, “I have the honour to inform you that you are the first woman of any nationality to enter reconquered Serbian territory.” All this time the thunder of guns had been growing louder and louder and at last we halted on a little plateau on which were a number of small tents and a line of fine cavalry chargers. Half a dozen officers, French and Serbian, came out to meet us and were surprised to see a woman—and above all, a foreign woman,—there.
You may also like