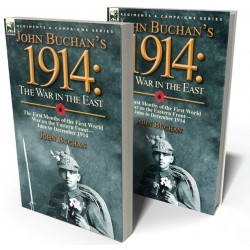 The outbreak of the great war on the Eastern Front

The Great War broke out in 1914. For those who live in the western world impressions of that catastrophic conflict are, perhaps inevitably, inspired by images of the Western Front with its ‘No Man’s Land’ of mud and miles of trenches fringed with barbed wire. Although the soldiers who struggled in France and Belgium were northern Europeans, British and Empire soldiers and later in the war, Americans, this was a truly world war fought from Asia to Africa, and, of course, in Eastern Europe where the spark that ignited the conflagration first burst into life. John Buchan’s writings on the opening stages of the First World War have been compiled by the Leonaur Editors into a comprehensive three volume set. This volume concerns a conflict little known or understood by many English speaking people though it describes the collision of mighty armies, momentous battles such as Tannenburg, and campaigns which swept over enormous tracts of land. In 1914 on the Eastern Front, German and Austro-Hungarian forces engaged with the might of Imperial Russia and the armies of the Balkan states. This final book of ‘John Buchan’s 1914’ trilogy is essential reading for all those requiring a complete understanding of how the world went to war a century ago. Buchan’s incisive narrative has been enhanced by the inclusion of photographs, diagrams and maps not present in the original text.