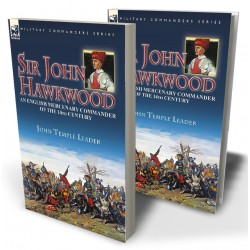 The most notorious captain of mercenaries of the early Renaissance

John Hawkwood was an Essex born Englishman, the son of a landowner. He began his military career during the Hundred Years’ War serving in France as a longbowman under Edward III, possibly fighting at both Crecy and Poitiers. Thereafter he joined the infamous ‘White Company’ band of mercenaries, operating in France before crossing into Italy. Such was Hawkwood’s talent for his occupation that before long he became the leader of the company. Italy, during this time, was in a constant state of factional flux, so Hawkwood and his men found ready employment for their talents. Selling their swords to the highest bidder proved a profitable business and Hawkwood amassed an astonishing fortune and earned himself abiding fame. This book chronicles Hawkwood’s life and campaigns, particularly during his time in Italy, in some detail and is recommended.

Having assumed the responsibility of giving the orders of combat, Hawkwood commanded that every man should first eat and drink; and then armed at all points, should go each to his respective standard. Then he arranged the men-at-arms in eight battalions, of different strength according to the number of the contingent which each condottiere had at his command. Some numbered as many as 1500 horse, some did not exceed 500. Hawkwood kept in the front lines with his 500 lances and 600 archers; then followed in succession: Ubaldini, Pietramala, Ugolotto Biancardo, Francesco Novello, Broglia and Brandolino, Biordo and Balestrazzo, and Filippo da Pisa.
The two last battalions remained mounted, forming a reserve of 1600 horse, placed at a distance and commanded to guard the carroccio, (species of war chariot with the bell on it), the Carrarese ensign of the Car, the other standards, and the council of the camp. The other six dismounted, forming two lines of about 3000 men each, distant about two arrows’ flight the one from the other; the pages were sent under cover with the horses, at a considerable distance.
Hawkwood also placed in reserve the thousand native foot soldiers (provvisionati) commanded by Cermisone of Parma, extending them in two long squadrons along a bank from which a moat was dug out, and over the bank he had improvised a pavesata which could oppose a solid resistance, and was garrisoned by 600 cross-bowmen.
******
Pavesata, a temporary palisade formed of the large shields or pavese used by foot soldiers in the 14th century. They were of a square form with the upper corners cut off and so high as to almost entirely cover the soldiers who used them.
******
Mounting a Thessalian charger (destriero tessalico) he did not fail to invoke St. Prosdocimus, St. Anthony, St. Justina, and St. Daniel, the protectors of Padua; and to incite every man to his duty, he gave the golden spurs to five Paduans whom Francesco Novello then created cavaliers, and on his own side he knighted some Englishmen.
All this was quite easy; the difficulty lay in making the Veronese Army abandon its excellent position, and in this he succeeded by sending to the attack the saccomanni and other light militia, mounted on horseback for the occasion: those, allowing themselves to be overcome and yielding their ground, drew the Veronese first outside, and then far away from the entrenchments, so that little by little their flank was exposed to the Carraras.
The manoeuvres commenced, Hawkwood with Ubaldini and Ugolotto Biancardo proceeded to survey the ground towards the enemy, and perceiving that this lent itself very well to the plan, with a rapid march moved the camp beyond the canal of Castagnaro, which is derived from the Adige, supporting his troops with its banks. He thus inverted the position, and the Carraras gained the advantage so lightly lost by the Scaligers. He had calculated so well, that the new position was scarcely taken when the Scaligers attacked them with the cry of Scala! Scala!
The enemy was already fatigued and disordered by chasing the saccomanni. It was still much superior in force, amounting in fact to twelve battalions of cavalry, besides a superiority of number, in archers and crossbowmen. The mêlée having begun, Hawkwood confided the lieutenancy of his own battalion to Pietramala, and followed by his page rode rapidly round the field to give another general glance and see how the affair was going.
The moment had come “to close the pincers:” he caused the band of Francesco Novello to change its position, for as this prince persisted in fighting, Hawkwood did not wish him to be too much exposed, he would at least leave a way of escape open to him. Then throwing his baton amongst the enemy, drawing his sword and crying to his men not the usual Carro! Carro! (Car), but the ferocious Carne! Carne! (Flesh), fell with his men-at-arms and infantry on the flank of the Scaligers, already engaged too far forward, whilst his clever archers showered their arrows from the bank, till it seemed to be raining. Ordelaffi and Ostasio da Polenta, who with 2500 horse constituted the reserve of the Veronese, made an effort to come to the rescue, but found the road already closed by Hawkwood’s interposition.
The action was rapid in the extreme and the effect instantaneous; the enemy was driven back upon its standards which were thrown to the ground. Francesco Visconti, who guarded them, lost his own flag and was unhorsed. Ordelaffi captain-general, Ostasio da Polenta, the two Dal Verme, Facino Cane, many other captains, and about eighty cavaliers of rank, were nearly all taken prisoners. A thousand nine hundred of the cavalry took to flight, but being energetically followed up they were nearly all taken.
A corps of infantry and Veronese peasants commanded by Giovanni da Isola remained intact on the field. Hawkwood ordered them to yield, but they answered that they would, resist, and so they were cut to pieces.
Relatively to the success there was but little bloodshed in that battle (716 dead and 846 wounded), but the number of prisoners was extraordinary: in all there were 4620, of whom 2620 were soldiers forming part of mercenary companies, and 284 men-at-arms; besides the three famous mitrailleuses cars with their respective bombarde which had not had occasion to throw their hen’s eggs.