Rome at War With Rome 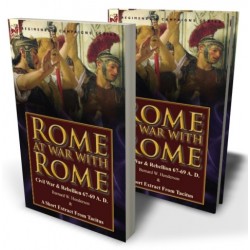 Civil war was not unusual in the history of ancient Rome, and this book concerns one of the most notable, complex and dramatic civil wars of the city-state, in which, within a few months, several great men had made their bid for control of the Roman Empire and paid for their failure with their lives. The struggle began with the fall of the infamous Nero. He was replaced by Galba, who set about making himself as unpopular as possible with almost everyone and was assassinated in the Forum—together with his heir, Lucius—by the Praetorian Guard. Otho then became emperor and seemed to be a popular, but he too was dead within twelve weeks as Vitellius, marching at the head of seven of Rome’s finest legions, bore down on the capital from Germania and inflicted a decisive defeat on Otho’s force at Bedriacum. Vitellius then embarked on a reign of terror. Mindful of recent events he bloodily eradicated everyone he thought might be a threat or from whose death he could materially benefit. Predictably, his reign was very short lived and in North Africa and the Middle East the legions acclaimed a new emperor, Vespasian. He proved to be a soldier and man of an entirely different calibre, and after invasion and battle Vespasian governed for a decade, was succeeded by his son Titus, and founded the Flavian dynasty. This book about a fascinating period of political upheaval and warfare in the ancient world, is accompanied in this Leonaur edition by an extract from Tacitus giving a contemporary view of the events covered in the main text.
Leonaur editions are newly typeset and are not facsimiles; each title is available in softcover and hardback with dustjacket.