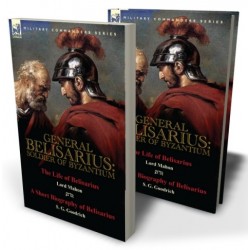 The military commander known as ‘the last of the Romans’

Flavius Belisarius is a name well known to those interested in the conflicts of the later Roman Empire at the time of Justinian I. The Roman Empire of the west had fallen and the emperor of Byzantine Empire in the east, centred on Constantinople, dreamed of recovering by conquest the Mediterranean territories that had been lost. The ambition was a colossal one, but Belisarius was undoubtedly the military commander for the task. Having won his first laurels against the Persians, he went on to fight the Vandals and Ostrogoths, and eventually captured Rome itself. At the time of his death in 565 AD the empire he served had expanded its territory by almost half. This unique Leonaur book contains two interesting accounts of the life, campaigns and battles of this great general.
Leonaur editions are newly typeset and are not facsimiles; each title is available in softcover and hardback with dustjacket.