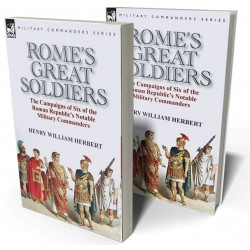 Great commanders of the legions of the republic

Students of the warfare of the ancient world will find much to engage them in this book which contains descriptions and assessments of the careers of six of the most notable military men who fought in the wars for the expansion of the ancient Republic of Rome. Within its pages are the battles and campaigns of Publius Cornelius Scipio, Africanus, Titus Quincticus Flamininus, Lucius Æmilius Paullus, Caius Marius of Arpinum, Lucius Cornelius Sylla, Felix and of course Caius Julius Caesar. These ‘captains of the Roman Republic’ fought their wars across the known world of their times, from the burning sands of the east, through northern Africa, into the mountains and dark forests of the wild north and through western Europe and across the sea into the British Isles. This is a thorough study of six military lives with detailed information about the armies they commanded and about the enemies of Rome, in all their exotic variety, against whom they struggled. ‘Rome’s Great Soldiers’ will provide essential insights for every student of the period. Previously published as, ‘The Captains of the Roman Republic’.