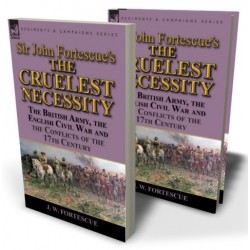 ~~A nation divided—the birth of an army

Among British Army historians the reputation of Sir John Fortescue stands virtually without equal. His comprehensive fourteen volume history is a work of unparalleled achievement in its field. Fortescue combines thorough source material research with insightful academic observation of the conduct of the campaigns he describes and of the decisions, errors and strategic and tactical options of their principal protagonists. The Leonaur editors have carefully selected passages from Fortescue’s magnum opus to create a series of books, each focusing on a specific war or campaign.
In the 17th century Britain faced a succession of ‘cruel necessities’ according to those who judged such things. Irreconcilable differences between parliament and King Charles I brought a tragic civil war that led ultimately to regicide. The House of Stuart brought nothing but disaster, dissension and unpopularity to its realm—irrespective of who was on the throne—and the ensuing rebellion resulted in the execution of the illegitimate son of Charles II, the Duke of Monmouth. On the positive side, the New Model Army demonstrated what British soldiers could be at their finest and the foundations of the formally constituted British Army were established. For the first time Fortescue’s incisive history of the English Civil War and its aftermath is available in a single volume and no library of the period will be complete without his direct analysis and critically observed view of the events and personalities of this epic period in European military history. This Leonaur exclusive volume has never been available before, and Fortescue’s original text has here been enhanced by the inclusion of  maps and diagrams.
Leonaur editions are newly typeset and are not facsimiles; each title is available in softcover and hardback with dustjacket.