The Crescent in the West: the Invasions of Europe by the Ottoman Turkish Empire, 1250-1699 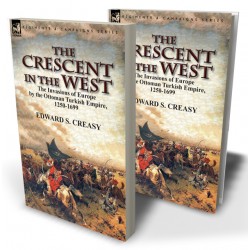 Centuries of warfare in Europe between the western and eastern worlds

It is difficult for many contemporary readers to imagine a time when the European and Christian world was constantly at threat from the huge invading armies of the East and the Islamic world. In 732 AD the Umayyad Moors were defeated in battle between Poitiers and Tours just 12 miles from Paris. However, the principal incursions of the ensuing 800 years came from the Ottoman Turkish empire, which fought to establish its grip on Europe well into the 18th century. For example, Eugene of Savoy, Marlborough’s famous military ally, first fought in those wars. This book, taken from Creasy’s more expansive work on the history of the Ottoman Empire, concentrates on the period from the first invasions of Europe by the Turks, to the period of imperial stagnation and the slow decline of Ottoman power. Within this pages are accounts of the sieges of Constantinople and the fall of Byzantium, the sieges of Vienna, the fall of Rhodes and the resistance of Malta, the Battle of Lepanto and the many other battles and conflicts fought across eastern Europe by the Austrians, Hungarians, Poles, Serbs and others in order to hold the advancing crescent banner at bay. This is a fascinating account of the collision between the cultures and faiths of east and west that has been all but forgotten by those who were not on its perennial front line.