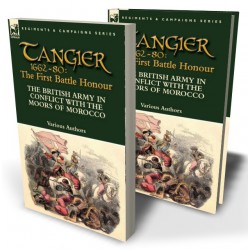 In view of how significant the events of the time were to the development of the British Army, it is unusual that the story of the battles for Tangier during the 17th century is little known to students of military history. Positioned on the Moroccan coast of North Africa in the Mediterranean, at the point where the sea enters the Atlantic Ocean, the city offered enormous strategic potential for Charles II into whose possession it had come from the Portuguese as part of the dowry of his wife, Catherine of Braganza. Cromwell’s superlative New Model Army had been recently disbanded and the need to defend Tangier against the native Moors (who took exception to the presence of European infidels on their shores) required the creation of new regiments of the crown. These regiments were the first in what became the regular British Army and their deeds were that army’s first battle honours. This original Leonaur title brings together  several historical overviews of the period combined with regimental accounts of the actions fought in Morocco and a first hand account by an officer who served through one of the final sieges of Tangier. The text is supported by useful maps and illustrations.
Leonaur editions are newly typeset and are not facsimiles; each title is available in softcover and hardback with dustjacket.