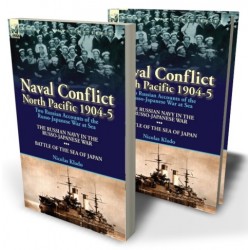 A conflict of empires in the modern age

At the turn of the 20th century Imperial Russia clashed with Imperial Japan. Russia’s view of itself was as a gigantic world power able to secure any of its holdings and all but immune from the dangers threatened by Japanese expansionism. This ultimately led to war, and the outcome of the ensuing conflict was a sobering shock to Russia’s fundamental incompetence, while the easy Japanese victory gave that nation the false impression that it was a great naval power able to achieve more than was actually the case. It has been suggested that this misconception sowed the seeds of Imperial Japan’s engagement and ultimate defeat during the Second World War. This interesting period of military history has its ardent aficionados and this special Leonaur edition, featuring two books by noted Russian historian Nicolas Klado, will be a welcome addition to their libraries. The first title examines the vessels and organisation of the magnificent, but destined to be humiliated, Russian navy during the Russo-Japanese War and the second title takes the reader through the pivotal Battle of the Sea of Japan from the Russian perspective. Highly recommended to all those fascinated by naval conflict and by this subject in particular.
Leonaur editions are newly typeset and are not facsimiles; each title is available in softcover and hardback with dustjacket.