The Voyage to Tsushima: Rodjdestvensky’s Russian Fleet, the Dogger Bank Incident & the Russo-Japanese War at Sea, 1904-05—From Libau to Tsushima with Two Short Accounts of the North Sea Incident 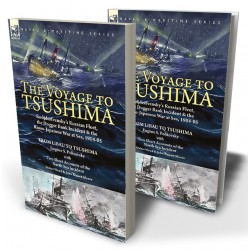 This book is sure to fascinate anyone interested in the naval warfare of comparatively modern times, for its narrative encompasses events bizarre, tragic and incompetent. The Russian Rodjdestvensky squadron set out from northern Russia sailing south with a mission to engage Japanese shipping on the high seas, but instead the enemy it first encountered was British fishing vessels engaged in their normal and peaceful business off the Dogger Bank in the North Sea. How the Russians could mistake these fishermen for Japanese warships in that location is almost beyond imagining, nevertheless the Russian warships opened fire upon the trawlers with disastrous consequences both in loss of life and politically. Indeed, the outbreak of war between Russia and Britain was only narrowly averted. After its incredibly long voyage to south-eastern seas, the Russian fleet eventually closed with its true enemy off the island of Tsushima between Korea and Japan and was promptly destroyed in one of the most decisive and significant sea engagements in naval history. This book was compiled from the letters to his wife of Politovsky, Engineer-in-Chief of the Russian fleet, who was an eyewitness to all these events and who was killed in the final battle. Included in this special Leonaur edition are two smaller accounts of the Dogger Bank (or ‘North Sea’ as it is also termed) Incident.