The Hawke Battalion of the Royal Naval Division 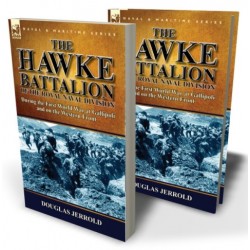 The campaigns of the Royal Naval Brigades have always fascinated students of military history. During several notable campaigns of the Victorian era including the Crimean War, the Indian Mutiny, the Zulu War and the Boer War these ‘sailors without ships’ left their natural element (invariably dragging and pulling their guns with them) to do battle alongside their comrades of the British Army. The story of the naval brigades of the First World War was somewhat different for here were units, named for the great admirals of the age of sail, which had been specifically created to act and fight as infantry whilst maintaining the traditions of the ‘senior service’. The requirements of this great conflict meant that the initial role of the naval brigades to defend port areas very quickly gave way to the pragmatic need for fighting battalions in the field. After the debacle at Antwerp, the Hawke Battalion was re-formed and took part in the ultimately disastrous Gallipoli Campaign before being transferred to the Western Front where it played its part in the Battle of the Somme. This is a riveting account that benefits from the authenticity of first-hand experience written by an officer who served with the Hawke Battalion.
Leonaur editions are newly typeset and are not facsimiles; each title is available in softcover and hardback with dustjacket.