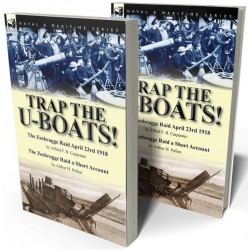 From the first months of 1915, when the Great War on the Western Front ground to a stalemate of fixed lines of trenches, the protagonists were committed to a conflict of attrition. Neither side could affect a military breakthrough, but the Allies had the distinct advantages of both unrestricted access to the worlds seaways and the a steady stream of materiel which crossed the Atlantic from the United States of America. To disrupt this essential war traffic Germany fine tuned submarine warfare in the form of the U-Boat. This countermeasure proved so effective that the huge number of merchant vessels sunk by German submarines meant that by 1917 there was a realistic potential that the Allies might lose the war having been denied sufficient resources to continue to fight. To hinder the effectiveness of the U-Boat ‘wolf-packs,’ a daring raid was devised to blockade the principal submarine base at the port Zeebrugge in Belgium by sinking a vessel in the approaches to its harbour. This audacious action, carried out by the Royal Navy, became one of the most remarkable feats of naval warfare of the First World War. This Leonaur book contains two accounts of the Zeebrugge Raid and is recommended.