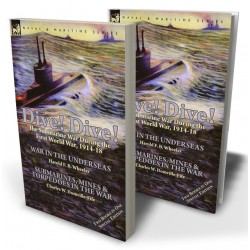 This Leonaur volume brings together two excellent works on submarine warfare during the First World War in a single good value edition. Wheeler’s work provides an interesting and varied overview of the allied effort to overcome the U-Boat threat, including details of the raids on Zeebrugge and Ostend. It deals with submarines in action in the various theatres of the war from the Atlantic Ocean to the Mediterranean Sea. Submarine v submarine operations and depth charging are described and anecdotes of submarine actions throughout the conflict feature prominently. Domville-Fife’s book perfectly partners Wheeler’s work by providing detailed descriptions of the submarines of six warring nations, together with technical details of torpedoes and mines. The torpedo boat, mine laying and mine-sweeping fleets plus other anti-submarine tactics are also covered in some detail.