The Goeben & the Breslau: the Imperial German Navy in the Mediterranean, 1914—The Flight of the Goeben and Breslau

Home » Non Fiction » Naval and Maritime » First World War » The Goeben & the Breslau: the Imperial German Navy in the Mediterranean, 1914—The Flight of the Goeben and Breslau 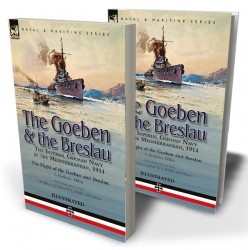 The Goeben-Breslau Incident was a naval action which took place in 1914 in the Mediterranean at the outbreak of the First World War. Ships of the Royal Navy Mediterranean fleet attempted to intercept the German battle cruiser SMS Goeben and the light cruiser SMS Breslau. The pursuit raced eastwards across the ‘middle sea’ until the German warships passed the Dardanelles to safely reach Constantinople (Istanbul) in Ottoman Turkey, at which point they were handed over to the Turkish Government and renamed Yuvaz Sultan Selim and Midili. The ships subsequently engaged Russian military positions bringing Turkey into the war as a German ally. The Goeben-Breslau affair was believed to have far reaching consequences for the allied cause and the failure of the allied naval commanders engaged effectively ended their careers. This Leonaur edition gathers together information on this little-known naval action from several sources and the text is supported by maps and photographs which were not included in the original publications.

The Admiralty reply of the following day was, therefore, both a definite confirmation of my proposed dispositions together with additional instructions concerning them; and I acted, not upon an assumption but, upon orders. These instructions were of the greatest moment. The significant clause was “. . . but Goeben is your objective.” That order clearly indicated that two immediate objects were to be pursued simultaneously: the watch upon Austria and Italy in the Adriatic, and the watch upon the Goeben; and that, of the two, the watch upon the Goeben was the more important.
There were also to be fulfilled the earlier instructions: that I was to protect the transport of the French African Army, and to avoid being brought to action by superior forces. The order to protect the French transports was, in fact, covered by the order to watch Italy, Austria and the two German ships. The contingency of being confronted by superior forces, did it occur, must have involved the subordination of all other considerations, for the only way of avoiding action is to retreat.
At 4 a.m. on that Monday morning, 3rd August, I received the Admiralty instructions. At the same time, although I knew nothing of it, the French Fleet sailed from Toulon for the Algerian coast.
At 7 a.m., the Chatham reported that neither the Goeben nor the Breslau was in the Strait of Messina. At the same time, I received information that Goeben and Breslau had been sighted early on the previous (Sunday) morning off Cape Trion, the southern horn of the Gulf of Taranto, heading south-west. It therefore appeared that the two German ships had escaped from the Adriatic. In order both to maintain the watch on the Adriatic and to find Goeben and Breslau, at about 8.30 a.m. I ordered Rear-Admiral Troubridge, whose squadron was then about midway between Cape Spartivento, Italy, and Cape Passero, Sicily, to send the light cruiser Gloucester and the eight destroyers to the mouth of the Adriatic, while the rest of his squadron was to pass south of Sicily and to the westward. The light cruiser Chatham was ordered to pass westward along the north coast of Sicily. The light cruisers Dublin and Weymouth were set to watch the Malta Channel. These dispositions were made in case the German ships should endeavour to pass westward, and they were reported to the Admiralty.
At 1.30 p.m. I made further dispositions. Rear-Admiral Troubridge was instructed to proceed to the mouth of the Adriatic with the First Cruiser Squadron to support the Gloucester and the destroyers there, and Black Prince was ordered to rejoin the Cruiser Squadron. The two battle cruisers Indomitable and Indefatigable were ordered to proceed through the Malta Channel and thence westward to search for Goeben, in accordance with the original Admiralty instructions allocating these two ships for that purpose. At the same time the Senior Naval Officer at Gibraltar was requested to keep a close watch for Goeben and Breslau in case they passed the Strait.
At 5 p.m., as I had failed to establish communication with the French either at Toulon or Bizerta, I despatched the light cruiser Dublin to Bizerta, with a letter to the French admiral. I did not, of course, know that by that time the French Fleet, steaming at 12 knots, had been at sea for eleven hours. It appears that the British Admiralty were also ignorant of the sailing of the French Fleet, for it is stated in the Official History (1), that “organised connection between the British and French Admiralties had not yet been established.” The Admiralty were, therefore, anxious lest the two German ships should escape into the Atlantic. There was never the least suggestion that they might escape elsewhere. My own impression that the Germans would turn westward was confirmed by a report that a German collier was waiting at Majorca.
At 6.30 p.m. in Inflexible, I left Malta to take up a watching position in the Malta Channel, together with the light cruiser Weymouth, the torpedo-gunboat Hussar and three destroyers. At 8.30 p.m. I received instructions from the Admiralty to send two battle cruisers to Gibraltar at high speed to prevent the Goeben from leaving the Mediterranean. Indomitable and Indefatigable were already on their way westward, and they were ordered to proceed at 22 knots to Gibraltar. The Chatham, which was then rounding Sicily, and which had nothing to report, was ordered to Malta to coal.
On Tuesday, 4th August, then, the position was as follows: Inflexible (flag), with Weymouth and small craft, was patrolling the Malta Channel; Rear-Admiral Troubridge, with the First Cruiser Squadron, was about midway between Malta and the mouth of the Adriatic, on his way to reinforce the Gloucester and the destroyers; the light cruiser Dublin had gone to Bizerta, with a letter for the French admiral; Chatham was coaling in Malta; and the two battle cruisers. Indomitable, Captain Francis W. Kennedy (in command). Indefatigable, Captain Charles F. Sowerby, were steaming westward at 22 knots.
Where were the Goeben and Breslau? No one knew. At 7 a.m. on Monday, the Chatham had reported they were not in the Strait of Messina. It was now Tuesday. The fact was, they had passed the Strait during the night of Sunday 2nd—Monday 3rd, ahead of the Chatham.
At 8.30 a.m. on Tuesday, 4th August, I received information that Bona had been bombarded by the German ships.
At 9.32 a.m. Indomitable and Indefatigable, off Bona, on the Algerian coast, sighted the Goeben and Breslau, which were steering to the eastward.