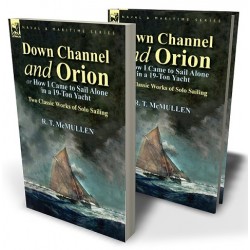 The single-handed sailing pioneer and his vessels

For anyone interested in single-handed sailing the name of R. T. McMullen and his book, ‘Down Channel’—an abiding classic of sailing literature and considered to be essential reading for any yachtsman sailing in coastal waters—require little elaboration. The principal value of this special Leonaur edition is that it includes all of McMullen’s writings in a single volume. Published singly McMullen’s books contain some repetition of the text, for this edition Leonaur’s editors have removed the duplication to create a single cohesive and complete volume of McMullen’s writings about his pioneering voyages and his vessels. We have also enhanced and enlarged the original maps and diagrams to provide clear information to the contemporary reader. This is an ideal book for any library on sailing.
Leonaur editions are newly typeset and are not facsimiles; each title is available in softcover and hardback with dustjacket.