The Cruise of the Snark: a Sailing Voyage Through the South Pacific in a Cutter-Rigged Ketch

Home » Non Fiction » Naval and Maritime » Yachting and other sailing » The Cruise of the Snark: a Sailing Voyage Through the South Pacific in a Cutter-Rigged Ketch 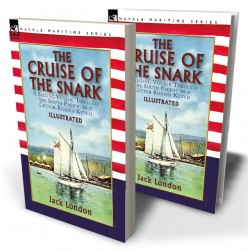 The story of Jack London’s adventure to the South Pacific

The Cruise of the Snark tells the story of a sailing voyage by the author Jack London (The Call of the Wild, White Fang, The Sea-Wolf etc) and his wife Charmain across the South Pacific. The Snark was a cutter-rigged ketch named after the subject of Lewis Carroll’s famous poem. She set sail with a small crew from San Francisco Bay in the Spring of 1907 bound for Hawaii, The Marquesas Islands, Tahiti, Bora Bora, Fiji, Samoa, and the Soloman Islands. Unfortunately, the Londons were forced to end their voyage at Guadalcanal because Jack London fell ill. The late arrival of the Snark at its expected destination, caused by London’s incapacity, gave rise to speculation that the vessel had been lost. The Londons sailed home by steamer, whilst the Snark was taken to Australia by a skeleton crew where she was sold. This description of a sailing adventure in the early 20th century is made very evocative by London’s exceptional prose and the text is enhanced by photographs.

The squall that rose up, covering half the heavens, and swept down upon us, as likely as not split into two squalls which passed us harmlessly on either side while the tiny, innocent looking squall that appeared to carry no more than a hogshead of water and a pound of wind, would abruptly assume cyclopean proportions, deluging us with rain and overwhelming us with wind. Then there were treacherous squalls that went boldly astern and sneaked back upon us from a mile to leeward. Again, two squalls would tear along, one on each side of us, and we would get a fillip from each of them. Now a gale certainly grows tiresome after a few hours, but squalls never. The thousandth squall in one’s experience is as interesting as the first one, and perhaps a bit more so. It is the tyro who has no apprehension of them. The man of a thousand squalls respects a squall. He knows what they are.
It was in the doldrums that our most exciting event occurred. On November 20, we discovered that through an accident we had lost over one-half of the supply of fresh water that remained to us. Since we were at that time forty-three days out from Hilo, our supply of fresh water was not large. To lose over half of it was a catastrophe. On close allowance, the remnant of water we possessed would last twenty days. But we were in the doldrums; there was no telling where the southeast trades were, nor where we would pick them up.
The handcuffs were promptly put upon the pump, and once a day the water was portioned out. Each of us received a quart for personal use, and eight quarts were given to the cook. Enters now the psychology of the situation. No sooner had the discovery of the water shortage been made than I, for one, was afflicted with a burning thirst. It seemed to me that I had never been so thirsty in my life. My little quart of water I could easily have drunk in one draught, and to refrain from doing so required a severe exertion of will.
Nor was I alone in this. All of us talked water, thought water, and dreamed water when we slept. We examined the charts for possible islands to which to run in extremity, but there were no such islands. The Marquesas were the nearest, and they were the other side of the Line, and of the doldrums, too, which made it even worse. We were in 3° north latitude, while the Marquesas were 9° south latitude—a difference of over a thousand miles. Furthermore, the Marquesas lay some fourteen degrees to the west of our longitude. A pretty pickle for a handful of creatures sweltering on the ocean in the heat of tropic calms.
We rigged lines on either side between the main and mizzen riggings. To these we laced the big deck awning, hoisting it up aft with a sailing pennant so that any rain it might collect would run forward where it could be caught. Here and there squalls passed across the circle of the sea. All day we watched them, now to port or starboard, and again ahead or astern. But never one came near enough to wet us. In the afternoon a big one bore down upon us. It spread out across the ocean as it approached, and we could see it emptying countless thousands of gallons into the salt sea. Extra attention was paid to the awning and then we waited. Warren, Martin, and Hermann made a vivid picture. Grouped together, holding on to the rigging, swaying to the roll, they were gazing intently at the squall. Strain, anxiety, and yearning were in every posture of their bodies. Beside them was the dry and empty awning. But they seemed to grow limp and to droop as the squall broke in half, one part passing on ahead, the other drawing astern and going to leeward.
But that night came rain. Martin, whose psychological thirst had compelled him to drink his quart of water early, got his mouth down to the lip of the awning and drank the deepest draught I ever have seen drunk. The precious water came down in bucketfuls and tubfuls, and in two hours we caught and stored away in the tanks one hundred and twenty gallons. Strange to say, in all the rest of our voyage to the Marquesas not another drop of rain fell on board. If that squall had missed us, the handcuffs would have remained on the pump, and we would have busied ourselves with utilizing our surplus gasoline for distillation purposes.
Then there was the fishing. One did not have to go in search of it, for it was there at the rail. A three-inch steel hook, on the end of a stout line, with a piece of white rag for bait, was all that was necessary to catch bonitas weighing from ten to twenty-five pounds. Bonitas feed on flying-fish, wherefore they are unaccustomed to nibbling at the hook. They strike as gamely as the gamest fish in the sea, and their first run is something that no man who has ever caught them will forget. Also, bonitas are the veriest cannibals. The instant one is hooked he is attacked by his fellows. Often and often we hauled them on board with fresh, clean-bitten holes in them the size of teacups.