The Closing Battles of the Peninsular War: the British Army Under Wellington in the Pyrenees & South of France, 1813-14

Home » Non Fiction » Napoleonic Period Warfare » Peninsular War » The Closing Battles of the Peninsular War: the British Army Under Wellington in the Pyrenees & South of France, 1813-14 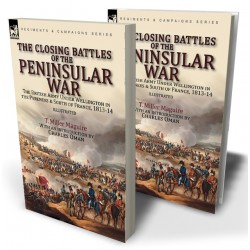 The content of this concise book concentrates on the final phase of the Peninsular War from the Battle of the Nivelle to the close of hostilities following the battles at Toulouse and Bayonne. Maguire's work on the subject was originally published in the United Services Institute Magazine. He wrote widely on military history, including a highly regarded work, 'Outlines of Military Geography', which explores the issue of terrain from a tactical perspective giving several different campaigns as examples. This present book follows the last months of the campaign in the South of France and includes erudite insights into Wellington's capabilities as a military commander, as well as a synopsis of the war by Charles Oman and maps and illustrations.

The attack began at daylight; and Lieut.-General Sir L. Cole having obliged the enemy to evacuate the redoubt on their right in front of Sarre by a cannonade, and that in front of the left of the village having been likewise evacuated on the approach of the 7th division, under General Le Cor, to attack it, Lieut.-General Sir L. Cole attacked and possessed himself of the village, which was turned on its left by the 3rd division under Major-General the Hon. C. Colville; and on its right by the Reserve of Andalusia under Don P. A. Giron; and Major-General C. Baron Alten carried the positions on La Petite Rhune. The whole then co-operated in the attack of the enemy’s position behind the village.
The 3rd and 7th divisions immediately carried the redoubts on the left of the enemy’s centre, and the Light division those on the right; while the 4th division, with the Reserve of Andalusia on their left, attacked the positions in their centre. By these attacks the enemy were obliged to abandon their strong positions which they had fortified with much care and labour; and they left in the principal redoubt on the height the 1st battalion 88th Regiment, which immediately surrendered.
While these operations were going on in the centre, I had the pleasure of seeing the 6th division under Lieut.-General Sir H. Clinton, after having crossed the Nivelle, and having driven in the enemy’s picquets on both banks, and having covered the passage of the Portuguese division under Lieut.-General Sir J. Hamilton on its right, make a most handsome attack upon the right of the enemy’s position behind Ainhoue and on the right of the Nivelle, and carry all the entrenchments and the redoubt on that flank.
Lieut.-General Sir J. Hamilton supported, with the Portuguese division, the 6th division on its right; and both co-operated in the attack of the second redoubt, which was immediately carried.
Major-General Pringle’s brigade of the 2nd division, under the command of Lieut.-General Sir W. Stewart, drove in the enemy’s picquets on the Nivelle and in front of Ainhoue, and Major-General Byng’s brigade of the 2nd division carried the entrenchments and a redoubt further on the enemy’s left, in which attack the Major-General and these troops distinguished themselves. Major-General Morillo covered the advance of the whole to the heights behind Ainhoue, by attacking the enemy’s posts on the slopes of Mondarrain, and following them towards Itassu.
The troops on the heights behind Ainhoue were, by these operations under the direction of Lieut.-General Sir R. Hill, forced to retire towards the bridge of Cambo, on the Nive, with the exception of the division on Mondarrain, which, by the march of a part of the 2nd division under Lieut.-General Sir W. Stewart, was pushed into the mountains towards Baygorry.
As soon as the heights were carried on both banks of the Nivelle, I directed the 3rd and 7th divisions, being the right of our centre, to move by the left of that river upon St. Pé, and the 6th division by the right of the river on the same place, while the 4th and Light divisions and General Giron’s Reserve, held the heights above Ascain, and covered this movement on that side, and Lieut.-General Sir R. Hill covered it on the other.
A part of the enemy’s troops had retired from their centre, and had crossed the Nivelle at St. Pé; and as soon as the 6th division approached, the 3rd division, under Major-General the Hon. C. Colville, and the 7th division, under General Le Cor, crossed that river, and attacked and immediately gained possession of the heights beyond it. We were thus established in the rear of the enemy’s right; but so much of the day was now spent, that it was impossible to make any further movement, and I was obliged to defer our further operations till the following morning.
The enemy evacuated Ascain in the afternoon, of which village Lieut.-General Don M. Freyre took possession, and quitted all their works and positions in front of St. Jean de Luz during the night, and retired upon Bidart, destroying all the bridges of the lower Nivelle. Lieut.-General Sir J. Hope followed them with the left of the army as soon as he could cross the river; and Marshal Sir W. Beresford moved the centre of the army as far as the state of the road, after a violent fall of rain, would allow, and the enemy retired again on the night of the 11th into an intrenched camp in front of Bayonne.