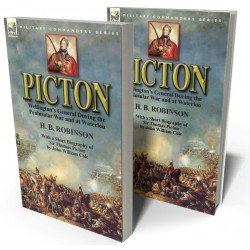 The life of Wellington’s hard swearing and fighting subordinate

For casual students of the Napoleonic age Sir Thomas Picton might be most notable for his death at the Battle of Waterloo where he was killed by a shot to the head, aged 56, while driving his infantry forward in a bayonet charge against d’Erlon’s French Army corps early in the conflict. A Welshman, Picton was known to be difficult man, naturally aggressive, short of temper and given to prolific cursing. Nevertheless, he rose from comparatively humble beginnings, one of twelve children, from the rank of ensign to that of Lieutenant General of the British Army. Perhaps more importantly he became a trusted member on the staff of the Duke of Wellington who, it is well known, would tolerate no officer he did not know to be a soldier and who combined courage with dependability and command capability. After a troubled period in the West Indies, Picton’s military career and reputation prospered and grew during the Peninsular War as the divisional commander of ‘The Fighting Third’. From 1810 onwards ‘the rough and foul-mouthed Devil’ (as Wellington described Picton) fought in most of the principal engagements undertaken in Spain, in the Pyrenees and into the South of France culminating in the final battle at Toulouse in 1814 as Napoleon abdicated. The emperor’s attempt to reclaim the throne in 1815 naturally brought Picton back to his masters side. He was wounded at Quatre Bras, though he kept the fact from his men. Probably never very popular, Picton was a man made for battle and died, the most senior officer killed at Waterloo, the archetypal warrior’s death. This thorough biography is enhanced in this Leonaur edition by a brief overview of Picton’s career.