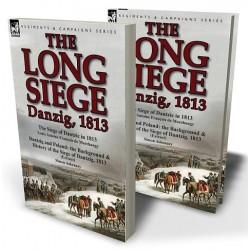 The year long struggle for a great sea-port

Danzig (modern day Gdansk) is a city which, by virtue of it’s unique geographical position, was destined to be coveted and so became the focus of conflict. It stands at the mouth of the River Vistula on the shores of the Baltic Sea and provides access to the wider seaways. It has always been valuable as a port of departure for goods (particularly the vast grain crops of the interior) and as a focus for incoming materials of commerce and war. For great nations poor in sea ports it was seen as an essential possession and so Prussia and Russia fought over it. For Poland, it was no less important, but embodied far greater significance as a part of the national motherland. By the start of the 18th century, Poland had ceased to have significant influence over its own affairs and was in thrall to its more powerful neighbours. The rise of Napoleon Bonaparte offered a possible ally able to deliver liberation. Unfortunately, in 1812 the emperor embarked on the great folly that was to be instrumental in the destruction of the First Empire—the invasion of Russia. Danzig was, of course, essential to his flawed strategy as a base of supply and later became a destination for the remnants of the shattered Grand Army after it’s apocalyptic retreat from Moscow. By early 1813 Danzig was under siege. The garrison of French and Polish soldiers and their allies, led by Jean Rapp, gave a magnificent account of themselves against the attacking Russians. This special Leonaur edition, with maps and illustrations not found in the original source material, contains two accounts of a little reported action of the Napoleonic Wars. One is a first hand account by an infantry officer of the French 30th Division, the other an historical overview of the siege and the events that brought it about. An essential addition to any Napoleonic Wars library.
Leonaur editions are newly typeset and are not facsimiles; each title is available in softcover and hardback with dustjacket.