The Battle of Bussaco 27th September, 1810, Between Wellington’s Anglo-Portuguese Army and the French Army Under Masséna 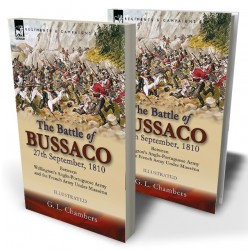 In the autumn of 1810 Wellington, at the head of an army of 50,000 British, King’s German Legion, Hanoverian and Portuguese troops, was in Portugal withdrawing before a French Army of 65,000 men under the command of Marshal Masséna. Wellington was retreating towards Lisbon to take refuge behind his brilliantly prepared Lines of Torres Vedras, while Massena pursued him, harassed by Craufurd and his Light Division. Ever mindful of the benefits of favourable terrain upon which to contest a successful defensive action, Wellington, on the 27th of September, turned at bay at Bussaco to fight a delaying battle. The attacking French columns were compelled to labour up steeply rising broken country in the face of punishing fire and paid dearly for it, though their misfortunes in Portugal would soon become far worse. This excellent and detailed book focusses entirely on the battle at Bussaco and includes many photographs and maps of the battlefield together with illustrations which were not included in the original edition. An essential book for every library of the Peninsular War.