The Napoleonic Campaign of 1805: Ulm, Austerlitz and the Campaign in Italy and the Tyrol

Home » Non Fiction » Napoleonic Period Warfare » Campaign and Battle Histories » The Napoleonic Campaign of 1805: Ulm, Austerlitz and the Campaign in Italy and the Tyrol 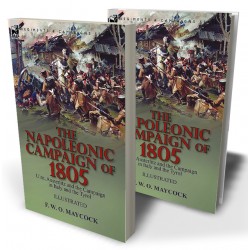 Napoleon at the pinnacle of his military genius

Captain Maycock, of the Suffolk Regiment, was the author of several concise histories of military campaigns, including those of the Napoleonic era. These were primarily written for a military readership, but are of interest to a wider audience who study military history. Modern readers appreciate that Maycock’s works were written from the perspective of the later 19th century, but this makes them no less useful. The campaign analysed in this book was a triumph for Napoleon following his disappointment at having to abandon his scheme to invade Britain and the defeat of the Franco-Spanish navies at Trafalgar by the Royal Navy. Turning away from the sea, Napoleon’s genius was unfettered in a land-based campaign and he marched to the east gaining victories at Ulm and Austerlitz which put an end to the third coalition of allies who opposed him. Maycock’s text concludes with an assessment of the campaign in Italy and the Tyrol. This Leonaur edition has been enhanced by the inclusion of maps and illustrations which were not in the original edition .

At once realising the gravity of the situation, Kutusoff ordered Kolowrat’s advance guard to seize Pratzen, while the remainder of his column was to attack St. Hiliare, and Miloradovitch, with some Russian battalions, was to oppose Vandamme. Some Austrian regiments from Kolowrat’s second line formed up south of Pratzen, supported by their artillery in position on the heights above Krenowitz, while the remainder of the column, moving to a flank in column of companies, wheeling into line, made a determined attack on St. Hiliare’s division.
They were, however, thrown into confusion by an unexpected salvo of grape from nine guns which had accompanied the French advance, and after a stubborn resistance, were driven from the heights in disorder. Miloradovitch had, meanwhile, made a gallant attempt to drive back Vandamme, but in spite of his utmost efforts, his men, staggered by several deadly volleys, were finally completely routed by a vigorous bayonet charge, while the battalions, endeavouring to attack the French left, were almost annihilated.
Kaminskoi’s Russian Brigade, which formed the rear of Langeron’s column, then made a determined attempt against St. Hiliare’s right, but were hurled back after a furious struggle, and the Allies retired altogether from the southern portion of the Pratzen plateau. Meanwhile, a division of Bernadotte’s Corps had appeared on Vandamme’s left, advancing into the space left vacant by Liechtenstein when he moved his cavalry from Blasowitz to support Bagration.
Vandamme was now ordered to wheel to the right to co-operate with St. Hiliare in an attack on the flanks of the second and third Russian columns, which were engaged in a fierce struggle with the French round Sokolnitz. Aided by a strong counter-stroke made by Legrand’s Division from Kobelnitz, they furiously assailed the flank and rear of the two Russian columns, throwing them into confusion and hemming them in between Sokolnitz, Aujezd and the lakes.
The Grand Duke Constantine, who had advanced towards the gap in the line caused by Liechtenstein’s withdrawal from Blasowitz, seeing the disaster which had occurred in the centre, moved the Guard to their left in the direction of Pratzen. Falling upon a brigade which Vandamme had detached to guard his left flank, the Russian infantry drove the hostile skirmishers back at the point of the bayonet, while their Horse Guards, overthrowing the opposing cavalry, also furiously attacked the French Brigade.
The latter, taken entirely by surprise, were unable to form square, and the 4th. Regiment were ridden down and cut to pieces, even losing their Eagle in the confusion. The emperor, who was close at hand, noting the disorder into which the infantry had been thrown, ordered Rapp to charge with part of the Guard Cavalry, and Bessières to support him with the remainder.
Charging home at full gallop, Rapp drove the Russian horsemen back past Bernadotte’s leading division on to their own infantry, but their second line, composed of the famous Chevalier Guard and Cossacks, fell on the French squadrons, and after a desperate hand-to-hand combat, drove them back. The Russians, however, were furiously attacked by Bessières, at the head of the Horse Grenadiers, and Chasseurs of the Guard, and a wild mêlée ensued, but nothing could stop the French horsemen, and after a dogged resistance the Russians were driven from the field.
Bernadotte’s Divisions, meanwhile, coming up at the double, fell on the infantry of the Russian Guard with the bayonet and totally overthrew them. The Allies’ centre was now irretrievably shattered and forced back in wild disorder beyond Krenowitz.