The Illustrated Captain Coignet: A Soldier of Napoleon’s Imperial Guard from the Italian Campaign to Russia and Waterloo, with 103 illustrations by Julien Le Blant 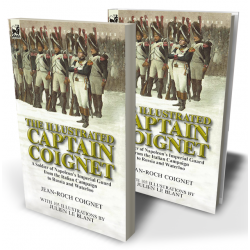 A superb edition of a famous French Napoleonic military memoir

Captain Coignet's highly regarded recollections of his experiences as a grenadier of Napoleon's Imperial Guard campaigning on the battlefields of Europe are familiar to almost all students of the Napoleonic Wars. In fact, among the comparatively few first-hand accounts of French soldiers of this period which have been translated into English, Coignet's nine 'notebooks' are probably the best known, and several editions of his book exist in print including those which have been substantially edited thus omitting significant portions of the original text. What makes this Leonaur edition outstanding is that it is fully illustrated with 103 fine drawings by the renowned French military illustrator, Julien Le Blant. The beautiful Le Blant illustrations have been enlarged for the first time so that each occupies a single page to enable modern readers to appreciate the fine draughtsmanship and historical accuracy of the artist’s work. A photograph of Coignet in old age is also included. This special Leonaur edition  benefits from the inclusion of an introduction by Sir John Fortescue, who was one of the leading British military historians of his day, and an introduction by Loredan Larchey from an early edition of of Coignet's work, making this edition, we believe, one of the most attractive and comprehensive editions of this wonderful book ever produced. This illustrated volume will have special appeal for military modellers and aficionados of military illustration, making this Leonaur Edition a fine gift.