The Campaigns of Field-Marshal Blücher During the Seven Years War, the Revolutionary War and the Napoleonic Wars, 1758-1815

Home » Non Fiction » Napoleonic Period Warfare » Prussian Accounts and other Histories » The Campaigns of Field-Marshal Blücher During the Seven Years War, the Revolutionary War and the Napoleonic Wars, 1758-1815 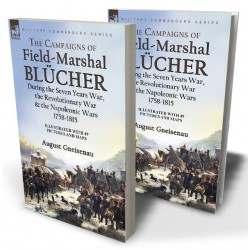 Blücher was born in Rostock on the northern Baltic coast of Germany in 1742. By 1758 he was a young hussar in the service of Sweden which had occupied the region. After being taken prisoner by the Prussians in 1760, he joined the Prussian Army, but was forced to resign for insubordination. A farmer until 1786, he returned to the army, rising in rank to lieutenant-general by 1801, to fight the armies of revolutionary, and subsequently Napoleonic, France. Driven by genuine hatred, he fought relentlessly despite many setbacks and his advancing years. In 1813 at Leipzig, the ‘Battle of the Nations’, an allied army under his command achieved a long awaited victory. Napoleon’s fortunes were in decline and in 1814 Blucher and his Prussians pressed on through north-eastern France to bring about the downfall of the First Empire of the French. Field Marshal Blücher is primarily remembered for his cooperation with the Duke of Wellington during the ‘Hundred Days’ campaign in 1815, which resulted in the allied victory at Waterloo and the final downfall of Napoleon. This book is an excellent and intimate biography of Blucher’s military career to 1815 by one who knew him well. It has been enhanced in this Leonaur edition by the inclusion of many illustrations, many by the renowned British military illustrator Richard Caton-Woodville, making this book ideal reference material for modellers, uniform and costume students etc.

Between Eutritsch and Möckern, General von York encountered Marmont’s army, drawn up in order of battle. General von Blücher ordered an immediate attack, about two o’clock, p. m.; and a warm contest ensued. Marshal Marmont supported his infantry by a battery of forty pieces of artillery, and General von York’s whole corps came into fire; pending which, General Langeron, upon the left wing, had taken, lost, and retaken, alternately, the villages of Gross and Klein Wetteritsch, and Marshal Ney had advanced again in support. The combat having continued for some time with dubious fortune, General von Blücher caused the reserves under General von Sacken to come into line; but before they could arrive on the ground, the two gallant corps already engaged had decided the day.
The enemy were completely beaten near Möckern, driven out of this village, and compelled to quit every point of their position; the allied cavalry broke into their masses of infantry, and sorely pressed them as far as Eutritsch and Gorlis, when night put an end to the pursuit. Marshal Ney had arrived as support, but came too late to renew the battle with any prospect of success; and, as General Langeron pushed on with vigour from Wetteritsch, Marshals Ney and Marmont caused their two corps to cross the River Partha at Schönfeld, leaving the villages of Gohlis, Eutritsch, and Mockau but weakly occupied, and taking up their headquarters at the manor-house of Schönfeld.
The Duke of Padua and General Dombrowsky had withdrawn their corps to Pfaffendorf, and a part of their troops occupied the suburbs of Leipsic. The trophies that fell into the hands of the dauntless Silesian Army on this day, consisted of 1 eagle, 2 standards, 43 pieces of cannon, 30 tumbrils, and above 2,000 prisoners. It was at a critical moment of this battle that the brave General von York put himself at the head of his cavalry, and rushing, with the overwhelming force of an imprisoned flood, upon the enemy’s battery, charged and carried it, taking thirty pieces of artillery, with all their appendages, in the space of a few minutes. The invincible courage and intrepidity of the Prussian cavalry were never more eminently displayed than on this day.
The conflict was murderous in the extreme; but the advantages, so dearly purchased, paved the way to that victory of victories which afterwards crowned the allied arms on the plains of Leipsic. General von Blücher’s headquarters were, on the 17th, at Lindenthal, near Breitenfeld; General Langeron made a movement with his corps towards the right wing of the enemy, drawn up in the rear of Eutritsch.
There being every reason to suppose that the Silesian Army, in having so closely pressed upon the enemy’s line, would be attacked in the course of this day by the united strength of Marmont’s and Ney’s corps, aided by reinforcements, the Crown Prince of Sweden was urged to hasten his march from Landsberg to Breitenfeld, to serve as a support. The Northern Army, in consequence, formed a junction with the left wing of the Silesian Army, late in the evening of the 17th.
******
The Northern Army, under the command of the Crown Prince of Sweden, had marched, in the morning of the 17th, from its position near Landsberg, and bivouacked at noon on the heights of Breitenfeld. It was pretty generally known at headquarters, that, when the Confederates resolved to renew the attack on the positions of Napoleon, near Leipsic, on the 18th, the Crown Prince of Sweden was adverse to the measure, and started many difficulties and objections. On this coming to the ears of our veteran General von Blücher, feeling anxious for the events of the day, he determined to talk to the prince himself, and therefore entreated Prince William of Prussia to accompany him to the crown prince, as he spoke no French, and understood the language but imperfectly. Accordingly, very early in the morning of the 18th, they proceeded to His Royal Highness’s headquarters, at Breitenfeld.
Upon Prince William’s opening the object of their visit, mentioning that the attack must at all events take place, and General Blücher’s wish for his powerful and decisive co-operation; the crown prince, in a hurried and hasty tone, exclaimed:
“Do but consider that you have to act against the ferocious untameable spirit of a tiger! Reflect, that it is with Napoleon you enter the lists, who has never as yet lost a battle!”
Our veteran eagerly inquired what the prince said, and, on being informed, replied in his usual firm manner:—“Tell His Highness I shall attack the enemy wherever I find him, this morning, and shall beat him too; let who will support me. Delay is all we have to fear. Indecision can alone undo us.”