The War of German Liberation: the Campaign of 1813 Against Napoleon by an Eyewitness

Home » Non Fiction » Napoleonic Period Warfare » Prussian Accounts and other Histories » The War of German Liberation: the Campaign of 1813 Against Napoleon by an Eyewitness 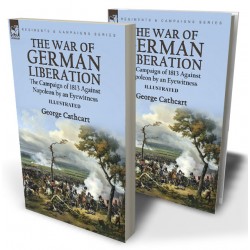 This account of the Napoleonic campaign fought principally in Germany in 1813 has been taken from the author’s more expansive work which also included an account of the 1812 campaign in Russia. Whilst these conflicts involved French, Russian, Prussian and Austrian armies, this work is particularly interesting because the author was an aide-de-camp to his father, British ambassador William, Lord Cathcart, later 1st Earl Cathcart, and his position on his staff gave him a roaming commission to make uninfluenced observations. Young George Cathcart was a junior officer in the 6th Dragoon Guards, at that time in his late teens, but nevertheless, commentators agree that his account (published in later life) of the conflict is lucid, concise and filled with interesting personal observations and experiences. This edition is prefaced by a scholarly overview of Cathcart’s narrative by the Earl of Ellesmere. Cathcart’s account begins with a description of the troops and military methods of the protagonists. The main text describes the battles of Lutzen, Bautzen, Dresden, Kulm, Katzbach, Gross Beeren, Wachau,Leipzig and Hanau. The book is particularly well served by its original maps and this Leonaur edition has been further enhanced by illustrations which were not present in the original edition of the text.

Commencing from the right, the first column, composed of the corps of Wittgenstein and Kleist, was to pass the defile of Nöllendorf and Peterswalde, and follow the great road from Töplitz to Dresden—which is parallel to the course of the Elbe, though not close to its bank. This route required an attack on the entrenched camp at Pirna, and called for sufficient precautions for blockading the small fortress of Königstein, and observing the bridges on the Elbe—which were too well protected by the neighbourhood of that fortress and other works to be easily molested.
The second column (composed of the Russian reserves, both infantry and cavalry, and the headquarters of Barclay de Tolly, who was in chief command of the Russians), was to march by the defile of Altenberg and Bärenstein.
A third column, composed of the main Austrian Army and the Imperial and Royal Headquarters, to march by Kommotau, and to enter Saxony by the great Leipzig road—a much more circuitous route than the other two.
A fourth column (composed of the corps of General Klenau, consisting chiefly of new levies which had been assembled in the country behind Carlsbad, and had not previously joined,) was to arrive by Annaberg, and, marching on the extreme left, to continue its route by Freyburg upon Dresden.
As soon as the Austrian main column had passed the defiles and reached Marienberg, its direction was changed suddenly towards the right, by Zöblitz and Sayda, upon Dresden.
On the 22nd of August Wittgenstein with the right column, was met by a detachment from the corps of St. Cyr, which his advanced guard engaged twice, and drove from their posts. In the evening he attacked the lines of Pirna with the bayonet, and carried them, driving from them the division of General Bonnet. A part of his opponents retired upon Dresden, and part by the bridges across the Elbe. Nothing further occurred that was worth recording till the afternoon of the 25th, when the several columns, with the exception of that of General Klenau, which was still a day’s march distant, had reached the valleys behind the sloping hills that form an amphitheatre on the western side of the old town of Dresden, on the left bank of the Elbe.
The advanced guard of Wittgenstein had already followed the enemy to the suburbs between the Elbe and the Grosse Garten; Kleist had also driven the outposts that he found on the Pirna road, behind the walls of that extensive garden or park, the chief place of public recreation near Dresden. These enclosures reach about a mile and a half to the southward of the town, and afford a strong hold for skirmishers.
A chain of picquets was established, and the Emperor Alexander, the King of Prussia, and Prince Schwartzenberg passed some time, in the calm of a fine summer’s evening, on a hill which afforded a distinct and beautiful bird’s-eye view of the plain that was so soon to become a field of battle. At a distance of not more than two miles from us, Dresden stood in the centre of the plain, with the broad and winding Elbe flowing through the city, and dividing it into the old and new town. On the opposite bank our prospect was bounded by the woody hills of Lusatia.
No doubt the subject that occupied the thoughts of the Allied chiefs at that moment was not the beauty of the scene so much as the important question whether to commence an immediate attack or not; but it was considered that the new redoubts and other defences, as well as the repairs that had been made in its once formidable ramparts, and the reestablishment of its wet ditches, placed it in a state of defence sufficient to render any hasty and rash attempt to carry it by assault quite unwarrantable at that late hour in the evening, especially with an army that was tired with marching; for the garrison of Dresden was known to amount to 30,000 men at least. The Allied Army therefore bivouacked for the night.
On this occasion, while the important conference of sovereigns and chiefs was going on at a little distance from us, General Moreau (who, from motives already stated, was either not invited to join it, or perhaps studiously held himself aloof from it,) was conversing familiarly in English (which he spoke perfectly), and smoking his cigar with the author and some others of the suite.