Memoir of General Sir Hew Dalrymple: Commander of the Portuguese Expedition During the Peninsular War, 1808 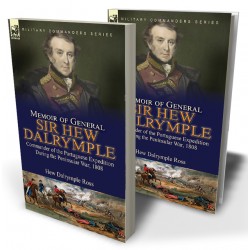 A controversial British commander of the Revolutionary and Napoleonic wars

Hew Dalrymple was a British career soldier who joined the 31st Regiment of Foot in 1763. By 1793 he was a colonel of the First (later Grenadier) Guards and in command of his own battalion. During the inauspicious Flanders Campaign in the Duke of York he saw action in a number of battles. After several administrative positions he was appointed acting governor of Gibraltar, a post he held until 1808. The next part of Dalymple's career was the one for which he is principally remembered, although it is blighted by controversy. He was appointed Commander of the Portuguese Expedition to replace Burrard and Wellesley (the future Duke of Wellington) after the victory at Vimiero, where the French force under Junot had been comprehensibly defeated. Dalrymple infamously halted Wellesley's pursuit of the French to Lisbon and subsequently became instrumental in the truce known as the Convention of Cintra, which allowed the French to be transported back to France in possession of the spoils of their invasion. The outrage caused by Dalrymple's actions became a national scandal leading to Moore's appointment to command in Iberia.

Having ordered the 42nd regiment to be embarked at Gibraltar for Portugal, I arranged with Sir Charles Cotton that, upon its arrival, it should remain with the fleet for the present, and, on returning on board the Phoebe, I desired Captain Oswald to direct his course towards the Mondego, for the purpose of joining the reinforcements expected from England, with Lieutenant General’s Sir Harry Barrard and Sir John Moore.
On the 21st, when sailing along the coast, a fleet of ships was descried under the land, and the first lieutenant of the ship and one of my aide-de-camps, being sent on shore for intelligence, they returned, about one o’clock in the morning, with information, that a victory had just been obtained, and that Sir Harry Burrard was on shore and had taken the command of the army. Upon receiving this intelligence, I made for Maceira Bay, at the place where the ships were at anchor, and, landing on the beach, proceeded to the village of Maceira, where I found Sir Harry Burrard, and established my headquarters.
Sir Harry Burrard sailed from Portsmouth on the 31st of July, on board His Majesty’s ship Audacious, together with a fleet of transports, containing Sir John Moore’s corps of 10,000 men. (See Proceedings Court of Inquiry.)
On the 16th of August, when off Cape Finisterre, Sir Harry shifted on board the Brazen sloop, and made sail for Oporto, where he arrived next day, and, learning that Sir Arthur Wellesley had landed at Mondego, he proceeded southward, and, on the 18th, arrived off the Mondego, where he found despatches from Sir Arthur Wellesley, in which it was recommended that Sir John Moore’s corps should land at Mondego, and proceed to Santarem, to confine the movements of the enemy on that side.
This suggestion Sir Harry Burrard determined at first not to accede to; but afterwards found cause to send back orders to Sir John Moore to land in the Mondego Bay, and (under a knowledge of Sir A. Wellesley’s despatches, which were sent for his information) to act as he might think best for Sir Arthur’s support. (See Proceedings Court of Inquiry.)
On the evening of the 20th, Sir Harry Burrard arrived off the landing-place at Maceira, when Sir Arthur Wellesley came on board to report his proceedings and the actual state of things, and ended by saying he had intended to march next morning, at five o’clock, by the Mafra-road, to turn the enemy’s position at Torres Vedras.
Of this plan Sir Harry Burrard did not approve; and gave orders to Sir Arthur Wellesley that the army should not move next morning. He at the same time sent orders by land, and by the Brazen sloop, to Sir John Moore, to proceed forthwith to Maceira, and, if any of his troops were on shore, to order them to embark and follow.
Sir Arthur Wellesley being of opinion that, if the army remained on its ground, it would be attacked by the enemy, he made such dispositions as he thought necessary in consequence. Sir Arthur was not disappointed in his expectations, for, soon after eight o’clock, a. m. on the 21st, the enemy appeared in force on the left of the position.
On the 21st, about nine o’clock in the morning, Sir Harry Burrard landed from His Majesty’s ship Alfred, where he had passed the night; and, upon receiving notice from an officer, sent by Sir A. Wellesley, that large bodies of the enemy were seen moving towards the left of the position, Sir Harry hastened to Vimiera, where he arrived about ten o’clock; at which time he found Brigadier-Generals Anstruther and Fane’s brigades vigorously attacked by the enemy.
Here Sir Harry Burrard was informed of, saw, and approved all the steps taken by Sir Arthur Wellesley to repulse the enemy, and directed him to proceed in the execution of an operation he had so happily begun; but he afterwards, before the Court of Inquiry, indignantly repelled the supposition that he had, at any time, (but particularly at that time,) an intention of giving up the command of the army to another. (See Proceedings Court of Inquiry.)
The enemy being repulsed in all parts, and in full retreat, Sir Arthur Wellesley proposed to Sir H. Burrard to take advantage of the victory, by pursuing them; which, however, the latter, from the view he had taken of the state of things, deemed it best to decline; and the army remained on the ground where the battle had been fought, and where I found it when I landed on the 22nd.