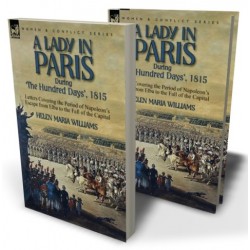 Eyewitness to the end of an epoch

During the bicentenary year the Battle of Waterloo much attention will focus on the battle itself and events before and after. This book is invaluable in that regard, since it was written by a British woman who had been a long established resident in Paris. She has left us an essential view of the return of Napoleon to the capital after his escape from Elba. Her narrative takes the reader through the turmoil of the flight of Louis XVI and the re-establishment of imperial government, the return of the defeated French Army after Waterloo, the defence of Paris and its eventual fall to the Allies. Eyewitness accounts of the arrival of the victorious armies and their occupation of the capital are comparatively rare, especially from a civilian female witness. What makes this book particularly noteworthy is that Helen Williams was a well regarded novelist, poet and translator. A republican and early feminist, Williams was imprisoned during the ‘Terror’, and was an intimate of Mary Wollstonecraft, Francisco de Miranda and Thomas Paine.
Leonaur editions are newly typeset and are not facsimiles; each title is available in softcover and hardback with dustjacket.

The French Army around Paris, notwithstanding the publicity of the imperial abdication, appeared to doubt of its truth. They declared that it was some trick of state, and that they knew their emperor too well to believe he would resign. This reminds me of the German who, when a report was spread through Germany, several years since, that Bonaparte was dead, exclaimed, “Bonaparte mort! Vous le connaissez fort peu—il s’en gardera bien.”
Napoleon had dispatched a farewell letter to the French Army under the walls of Paris, dated from Malmaison, the 25th June, 1815. This letter was addressed to the heroes of the army, and no doubt the lowest drummer fancied he saw his own name on the direction.
Soldiers, in yielding to the necessity which separates me from the brave French Army, I am confident that by its eminent services, it will merit that praise from its country, which is not refused even by its enemies. Soldiers, I shall follow your steps, though absent. I know every corps, and not one of them will gain any signal advantage without my having kept an account of the bravery it shall have shewn. We have both been calumniated, you, and myself. Soldiers, a few more efforts, and the coalition is dissolved. Napoleon will be grateful for the strokes you are about to inflict. Save the honour and the independence of the French. Be, to the last, the men I have known you for twenty years, and you will be invincible.
This letter of adieu was distributed to the army. It intimated absence, but the absent might return, of which himself was the proof. That he would return, they believed firmly, and had his death been announced, they would probably have expected his resurrection. Even the belief of his absence was by no means general; it was imagined, that he was lurking in some shape or other in their ranks, and that he would stand up in his own, whenever the great day of general contest should take place.
The first attack made by the allied armies was to the north of Paris, and was confined to skirmishes and distant cannonade. At three in the morning, on the 30th June, I was awakened by the first roar of cannon, not as it is usually heard in popular cities, the sign of victory, the symbol of public festivity, but the harbinger of woe, the messenger of death. The first cannon was fired from the heights of Belleville, which nearly front my window. I arose immediately. What contrasts the scene presented, and what dissonant sounds struck my ear! The sky was tinged with the first soft colours of the morning, and the hills and gardens covered with the freshest verdure, except where the Butte of Chaumont on the right, and the heights of Montmartre on the left, presented their formidable artillery, which was at that moment pouring forth its horrible contents; while, at intervals of silence, the note of earliest birds floated along the air, and seemed to reproach mankind for this disturbance of nature. Strongly impressed with the events of the last year, I was too much alarmed at the probable events of the present.
On the 30th March, 1814, I had been awakened also, at the first dawn of day, by the roar of cannon placed on the very same theatre, that of the hills, which overlook my windows. The cannonade on that day was long, loud, and tremendous. The volleys of artillery were almost incessant during twelve hours. Shells had torn up the gardens around us, and our only refuge was to retire behind the walls of the house, which we hoped were too thick for cannon balls to penetrate. That day had indeed been awful till, at six in the evening, the capitulation being announced, the tumult of battle gave place to the sounds of music; and some of the soldiers of the French army, and those of the allies, joined the nymphs of the Fauxbourg in the sprightly dance, forgetful, alas! of their fallen comrades.
The attack on the 30th June, 1815, was far less formidable. It was chiefly confined to musketry, and slackened very sensibly at six in the morning. Notwithstanding the fortifications on the heights, the city might have been entered on this side, but the slaughter must have been excessive; and the Duke of Wellington, who knew well the ground around Paris, made himself master of the best positions; and no longer attempting an entrance on the north, the allied army drew off by the river, towards Neuilly and St. Germain.
The musketry, which had continued in the plain of St. Denis, ceased altogether at about three in the afternoon. I then went on the boulevards; all the gay shops that enliven that brilliant walk were closely shut up, and what sinister presages might be read in every visage of the crowd! On examining the hostile passions pourtrayed in every countenance, it seemed as if the assembled multitudes waited only the signal for civil war. We appeared to be treading on a mine ready to receive the spark of explosion. The swarms of the Fauxbourgs St. Antoine and St. Marceau were let loose. They had taken no part in public events, since their time of active citizenship in the days of terror. But their dormant patriotism was now awakened, bribed or whipped up, and they issued from their retreats with the hope of being active in some extraordinary scene.
You may also like