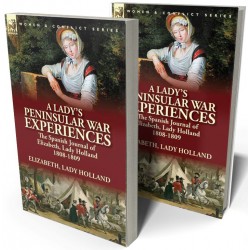 There can be no doubt that the socialite Elizabeth Vassall Fox was a remarkable woman. Initially married to Sir Godfrey Webster, a man 20 years her senior, she bore him five children, but by the time of their divorce in 1797 she was already pregnant again—by her lover, the Whig politician Henry Fox (3rd Baron Holland). They immediately married and Elizabeth bore seven more children to her new husband. Both Elizabeth and her husband admired Napoleon Bonaparte. Henry Fox’s political status gave him a roving commission and made him and his redoubtable spouse party to much information not necessarily available to the public at the time. Fox’s travels, accompanied by Elizabeth, took him to Spain at the time of the Peninsular War, and it is this period that makes Lady Holland’s journal so fascinating. As an independently minded woman of high social standing Elizabeth wrote directly—and often scathingly—about the people and events she experienced or which came to her notice in consequence of her husband’s position. This is interesting to modern students of the period not only as a rare female perspective, but also because much contemporary writing of the period has come from military gentlemen who might be relied upon to be guarded in their written views for the sake of good form or because discretion was—in the presence of the powerful—always the better part of valour. By contrast Elizabeth Holland’s often acerbic observations and fearless judgements may occasionally verge upon gossip, but are nonetheless historically valuable.