Laure Junot: Duchess of Abrantès & Wife of General Junot During the Napoleonic Age 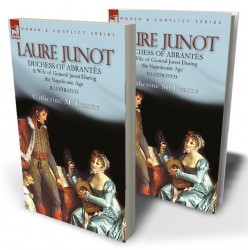 The life of a remarkable woman of revolution and empire

This book about the life of a woman who was central to many events within the French imperial court offers a different perspective on the Napoleonic Age, a period which has never ceased to fascinate students of military history.  Laure Junot had a romance with and later married one of the emperor’s outstanding lieutenants, the dashing General of Division, Jean-Andoche Junot. Her remarkable life story is told in gripping detail as she experienced the ‘Terror’ of the Revolution, the rise of Napoleon during the Consulate era and life within the most intimate circles of the elite during the glory days of the French First Empire. Laure Junot joined her husband on campaign in Spain and experienced the fall of the emperor, the drama of the ‘Hundred Days’ and the uncertainties of the Restoration of the Bourbon monarchy. An essential Napoleonic biography, in every way, from a female perspective. First published under the title ‘A Daughter of the Revolution’.

Ciudad-Rodrigo fell shortly afterwards, and Junot sent a hurried letter to Laura to be ready, as he would call for her at Salamanca; they were going on to Ledesma, which she heard with regret, as she found much to interest her at Salamanca besides being tolerably comfortable there, whereas Ledesma was an Arabic town perched on a sugarloaf-shaped rock surrounded by a burning, arid plain.
Before they left Salamanca, Laura had a narrow escape from being taken by the guerilla chief, Don Julian, who gave more trouble to the French than anyone in the Spanish Army. He had set his heart on taking Laura prisoner; and, having been warned of this, she discontinued her drives into the country, only going into an avenue just outside the gate of Zamora which led up a little hill so near the walls of the town that it was considered perfectly safe. One hot July evening Laura, whose health was, of course, now delicate, feeling unusually tired, went home early, while M. Magnien, who had been driving with her, walked on slowly to the top of the hill in question, from which he saw a man of suspicious appearance, with a red feather in his hat, mounted upon a mule, appear on the summit of a hill opposite. Presently another appeared, then a third, and when they numbered five M. Magnien turned and ran towards the town, pursued by the guerillas up to the gate, where, breathless and exhausted, he threw himself into the arms of the official who came out at that moment. Don Julian had been told the hour of Laura’s drive, and made preparations accordingly, which were only frustrated by her going home early.
After being two months at Ledesma, Laura accompanied her husband to San-Felices-el-Grande, a much worse place of abode. At Ledesma she had lodged in the best house the place afforded, which she declared not to be nearly so good as a gardener’s cottage in France; but it was a palace compared to her lodging at San-Felices-el-Grande.
The place was a miserable, ruined village among barren mountains many leagues from a town; the house she occupied was a damp, dark hole, in which she lay upon a bed of sickness in a room lighted only by a small window high up in the wall, and with a floor of beaten earth, on which was arranged the portable furniture she had in the fourgon, which alone made it habitable.
They had at first hoped that she would be able to get to Madrid if she could not return to France for her confinement. But the escort which would have been sufficient for her safety could not now be spared from Junot’s corps d’armée, so that her only hope was that she might reach Lisbon, or even Coimbra, in time. The soldiers were dying of dysentery and nostalgia in alarming numbers. Junot and Ney, with whom he had an interview, both took a gloomy view of the present and future prospects of the war, and Laura grew worse and worse. Often when she awoke in the night from a feverish, troubled sleep she saw her husband standing by her bed crying or looking at her with mournful eyes.
“And I cannot get you out of this desert!” he would exclaim, kissing her hands and shedding tears of despair. “There is no possibility—none! I would rather send in my resignation and go with you myself than trust you to a miserable escort which would be defeated by the first band of guerillas posted in the woods of Matilla to lie in wait for you. But I cannot! I cannot without dishonour! for the guns will be at work again directly, and I cannot turn my back on the enemy.”
The French were now besieging Almeida, which was the first fortress over the Portuguese border as Ciudad-Rodrigo was the last on the Spanish side.
Wellington was drawing on the army of Masséna into a country deserted and devastated by its inhabitants.
One evening after sunset there was a loud explosion, and the house shook violently. “What is it?” cried Laura in terror. “Is it an earthquake? Another danger in this dreadful country.”
There was another detonation, and again the house rocked.
“It is the fortress!” was the general cry; and Junot with the rest rushed out to a ruined tower at the end of the village, on a rising ground. Presently he returned.
“Almeida is on fire!” he said; “it is a splendid sight! You must see it, Laura; they shall carry you.”
Laura was accordingly carried up into the tower, from whence she looked out towards the beleaguered town.
The autumn wind howled among the mountains, the sky overhead was dark, but the horizon was a lurid mass of fire and from time to time sheets of flame shot up and despairing cries seemed to be borne upon the gale.
Almeida had been blown up—it appeared accidentally. A gunner leaving his post having fired his last shot at random towards the town, it fell into the open door of the arsenal of the château before which a hundred workmen were making cartridges. Besides this forty families were blown into the air, as the townspeople had crowded there for refuge. With the explosion the walls seemed to open, and the French troops poured in through the breaches.
Guns and mutilated bodies were flung out to an incredible distance, and when, the next day, Junot returned from visiting the scene of the catastrophe he was pale with horror at the frightful spectacle he had witnessed.