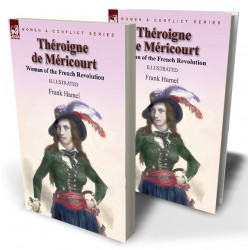 Belgian born Anne-Josephe Théroigne (Terwagne) of Méricourt (Marcourt) was active as an agitating revolutionary agent in the Austrian held Low Countries towards the end of the eighteenth century. In 1789, dressed as a man, she was present at the National Assembly in Paris where she engaged in promoting the French Revolution and the rights of women. In 1791 these activities resulted in her being imprisoned by the Austrians. When she returned to Paris in 1792, she was welcomed as a heroine, but went on to suffer continual criticisms of her character for alleged sexual immorality. Her alliance with the moderate Girondin political party resulted in radical Jacobin women turning against her, and in the spring of 1793 in the Jardin de Tuileries she was stripped naked, severley beaten and might well have been killed but for the intervention of Jean-Paul Marat, who would later be assassinated himself. Théroigne went on to suffer painful headaches and developed mental disorders. Her behaviour became progressively more erratic and in 1794 she was certified insane and committed to an asylum where she remained until her death in 1817, aged 54 years.

Landresc, deeply moved by her piteous plight, turned away his head.
She sobbed, she gave way to hysterical shrieks, she declared it would be better to die at once than to endure captivity. Nothing could calm her.
Presently the governor of the prison, Captain André Schoeniger, appeared upon the scene. He was accustomed to these outbreaks of despair. All the prisoners enacted the same tragedy in a lesser or greater degree. All declared themselves martyrs.
Schoeniger had been well prepared for the kind of prisoner he had to expect. He had been instructed to have her strictly guarded, but she was to be treated humanely. There was to be no brutality.
The captain himself conducted “Madame Theobald” to her cell. This was an unusual honour, rarely accorded to any prisoner, except those of peculiar distinction.
The approach to the upper regions of the fortress was not one to inspire hope of freedom in the captive’s breast. Hewn through huge and unscalable rocks, the way to the prison wound through a narrow and dark subterranean passage, up countless flights of stairs, climbing ever higher and higher into what was a well-nigh impenetrable fastness. After mounting more than two hundred steps a little court was reached, where there was a revolving bridge and massive doors heavily barred with iron. Once beyond that, and the prisoner said goodbye to the outer world—for who knows how long? Then more mounting upward, in a tower this time, the way becoming more narrow and more gloomy, and the air more damp.
At last a second door as black and solid as the first was reached. It led into the prison proper. Fainting and breathless the prisoner stood still, unable to move another step. Schoeniger, taking her by the arm, urged her on. No prisoner was allowed to loiter there. There was a second tower to mount, more of the huge stone steps built into walls so thick that no voice could echo there; even the breath seemed stifled. Théroigne felt she knew what burial alive would mean.
The passage widened out into a vault, and that in turn into a courtyard, open to the sky at last. Round about were high walls containing many windows, strongly barred. And here every sign of the way they had come was lost. The four sides of the court appeared alike in every particular. Which of the closed apertures was the one that led out of this horrible trap? It was impossible to remember. How could any prisoner dwell for an instant on the thought of escape through those bewildering labyrinths of brick and rock, guarded as they were at regular intervals by armed sentries. Far better death than captivity in such a place!
The cell into which Théroigne was led was not terrible. It had two windows, one looking into the courtyard, the other into the surrounding mountains. The furniture was of white wood, and of the plainest description. It communicated with a room occupied by the sentry. No one could enter her apartment without being challenged by the guard.
The captain ordered an inventory to be taken of the prisoner’s possessions. They were not numerous. A hat, two gowns, a silk kerchief, a brown cloak trimmed with fur, a muff, two pairs of shoes, four undergarments, five handkerchiefs, ten pairs of silk stockings, and a belt comprised the whole of her wardrobe. There was nothing like a riding-habit, and no weapons.
The governor thought she was but ill provided for. Just then his eye fell upon some books.
“What have we here?” he cried.
The soldier read out the titles. Works of Seneca, Complete Works of de Mably, and Plato’s Dialogues.
“She must be a blue-stocking,” said the governor, laughing; but his manner implied a new accession of respect.
There was nothing else to account for except a few silver spoons, some silver buttons, and other gewgaws. These were placed in a casket and locked away. The search ended, the governor retired, and the prisoner was left alone. She heard the heavy door close and the bolts shot.
She fell on her knees and called for mercy. She wrung her hands, tears streaming down her cheeks.
There was no answer to her cry.