The Loyal Lusitanian Legion During the Peninsular War 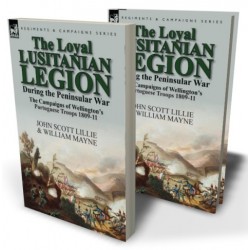 The Loyal Lusitanian Legion was part of the British Army. Though manned principally by Portuguese troops, there were also Germans and British soldiers among its ranks and, as one might expect, its commanding officer, Colonel Robert Thomas Wilson, was British. The creation of the unit was the initiative of two Portuguese army officers who were exiled after the domination and occupation of the Iberian peninsula by Napoleon’s French Army. This light infantry regiment, with a battery of artillery attached was, of course, to fight the invading French during the Peninsular War. The ‘LLL’ had a comparatively short existence, between 1808 and 1811, but it fought in both Portugal and Spain most notably in battles at Busaco and Talavera. However, battlefields were not the best places to employ troops of this kind and their services were best performed in conducting raids behind enemy lines in concert with guerrilla and other Portuguese and Spanish forces—the covert operations of the day. Upon disbandment ‘LLL’ troops were transferred into Caçadore battalions of the Portuguese Army where they continued to be a highly valued and efficient part of Wellington’s Army in the field.
Leonaur editions are newly typeset and are not facsimiles; each title is available in softcover and hardback with dustjacket.