The Campaigns of the Coldstream Guards, 1793-1815: the Revolutionary War, Peninsular War and Waterloo Described by an Eyewitness Officer 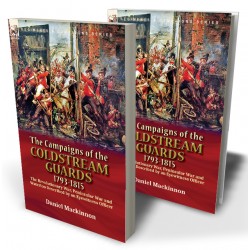 Second to none--the campaigns of the Coldstream Guards

Daniel Mackinnon, the author of this book, was an officer of the Coldstream Guards. In 1833 he published a history of his regiment from its creation and through the wars against revolutionary and Napoleonic France. This Leonaur book, a stand-alone account derived from Mackinnon's larger work focuses on his personal experiences. The regiment served in the disastrous campaign in the Low Countries under the Duke of York and saw hard fighting during the Peninsular War under Wellington. The author describes the regiment on campaign during the battles of Talavera, Busaco, Barrosa, Fuentes d'Honor, Albuera, Salamanca and Vittoria, as well as in the Pyrenees and South of France Campaign towards the close of the war. Mackinnon is perhaps best known as one of the heroic defenders of the château-farm of Hougoumont during the Battle of Waterloo in 1815. His view of these events is very personal and occasionally at odds with other accounts, though perhaps more interesting because of that. The author's text is accompanied here by the inclusion of maps and illustrations which were not present in the source book.

The English formed in two lines, the reserve in column on the right. The Guards supported the centre. General John Stuart’s and Doyle’s brigades moved in column to rear of the left. All preserving the greatest order steadily advanced under a heavy fire of artillery and musketry. The French were forced to retire through a plain of three miles to their lines in front of Alexandria.
The English lost twelve hundred and eighty-four killed and wounded; the French about five hundred, with four guns. Ensign Jenkinson of the Coldstream was killed, and Captain Beadon wounded; two rank and file killed, and four wounded, Major-General Cradock distinguished himself; it was principally owing to his excellent arrangements that the enemy’s cavalry was repulsed. The French colonel, Latour Maubourg, was dangerously wounded.
Lieutenant-Colonel Brice of the Coldstream Guards commanded the piquets on the fourteenth, when he was attracted by some firing, and, proceeding to the spot, was wounded and taken prisoner, and died two days after. (Sir Robert Wilson, in his Expedition to Egypt, says, “he missed his way when going his rounds, which it was almost impossible to prevent.” Walsh, in his Campaign, also gives the same account.)
The British troops in every encounter from the time of their landing had shown themselves decidedly superior to the French. Their position was about four miles from Alexandria, with the sea on their right flank, and the Lake of Aboukir on the left. In front of the centre a considerable plain extended as far as the elevated ground on which the enemy had entrenched themselves. The Twenty-Eighth and Fifty-Eighth regiments were posted among some ancient ruins and redoubts on the rights supported by the Twenty-Third, Fortieth, Forty-Second, and the Corsican Rangers. Between the right and the light centre, occupied by the Guards on a rising ground, was a flat, on which there were some cavalry.
From the hill where the Guards stood the line ran obliquely to the left, at the end of which two batteries were intended to be constructed, and were in a state of forwardness. On the left of the Guards the Ninety-Second, Second, Fifty-Fourth, First, Eighth, Eighteenth, Ninetieth, and Thirteenth regiments were stationed in échelon, ready if necessary, to form on the Guards. The second line was composed of the regiments of Minorca, De Rollers, Dillon’s, the Queen’s, Forty-Fourth, Eighty-Ninth, Twelfth, and the Twenty-Sixth Dragoons.
The troops under the French General Menou, recently arrived from Grand Cairo, occupied a strong defensive position on some steep hills. In front of their right ran a strip of land joining the canal, which occasioned the left of the English to stand in the oblique position before described. (The city and Pharos of Alexandria, with Pompey’s Pillar and Cleopatra’s Needle, were distinctly to be seen from the English camp).
An hour before day on the morning of the twenty-first of March, General Menou, with his army increased to thirteen thousand men, and about equal to the English, made a false attack on the left; but the report of musketry soon announced that the right was the point he really intended to assault. The British awaited the enemy’s approach with great composure: the latter advanced with loud huzzas and drums beating; Colonels Paget and Houstoun, however, whose regiments held the key of the position, would not permit a shot to be fired till they were close at hand, when the troops were ordered to open their fire, which obliged the French to retreat. The enemy then wheeled to their right for the purpose of surrounding a redoubt; a second column attacked in front, and a third penetrated the ruins before mentioned.
At this moment Colonel Crowdjye with the Fifty-Eighth, after two or three rounds, rushed on them with the bayonet; this charge was supported by the Twenty-Third. The Forty-Second seized the opportunity, and advanced in the most gallant manner to cover the open space at which the column had entered, who after great loss surrendered. The Twenty-Eighth, the Forty-Second, and Fifty-Eighth regiments, and the flank companies of the Twenty-Third and Fortieth under Colonel Spencer, greatly distinguished themselves. General Stuart came up with his brigade, which quickly threw the enemy into disorder, and at length forced them to a precipitate flight. It was at this critical moment that Sir Ralph Abercrombie received his mortal wound. (Sir Ralph Abercrombie died on board the Foudroyant on the 28th of March.)