Wellington’s Army: the Commanders, Organisation, Tactics and Equipage of the British Army During the Peninsular War, 1809-14 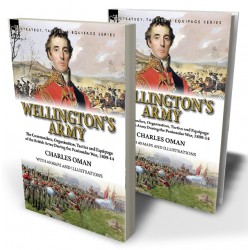 The excellence of Sir Charles Oman’s scholarship as an historian is well established. He wrote on a wide variety of subjects and historical periods in an erudite but succinct and easy to read style and his comprehensive multi-volume history of the Peninsular War is widely regarded as the most significant work on the subject since the publication of Napier’s history. This book is equally well known and well regarded. Within its pages Oman describes in some detail the British Army that fought the First Empire of the French in Spain, Portugal and the South of France. This story would be incomplete without that army’s commander, and Wellington’s performance and methodology is closely described, together with those of his most significant lieutenants. Each constituent part of the army is considered from structure to equipage and operations in relationship to the French forces which opposed them. Oman’s examination of the British Army of the early nineteenth century is now regarded as a classic. This Leonaur edition is unique since it includes 40 illustrations and maps which did not appear in the original edition of the book. Oman devoted two chapters to his bibliographical sources and though they remain in this edition, since their content is fascinating and invaluable, they have been moved from the beginning to the end of the book in the interest of accessibility to the principal subject of the work.

It was of course a very different matter when the French cavalry had to face the steady battalions of the British Army. Looking down all the record of battles and skirmishes from 1808 down to 1814, I can only remember two occasions when the enemy’s cavalry really achieved a notable tactical success. Oddly enough both fell within the month of May, 1811. At Albuera there occurred that complete disaster to a British infantry brigade which has already been described in the preceding chapter. The other, and much smaller, success achieved by French cavalry over British infantry at Fuentes de Oñoro, a few days before the greater disaster at Albuera, has also been alluded to. These two disasters were wholly exceptional; usually the British infantry held its own, unless it was absolutely taken by surprise, and this even when attacked frontally by cavalry while it was deployed in the two deep line, without forming square. If the British had their flanks covered, they were perfectly safe, and turned back any charge with ease.
Indeed, the repulse of cavalry by British troops in line, who did not take the trouble to form square because their flanks were covered, was not infrequent in the Peninsular War. The classic instance is that of the 5th Northumberland Fusiliers at El Bodon in 1811, who advanced in line firing against two French cavalry regiments and drove them off the heights, being able to do so because they had a squadron or two of British horse to protect them from being turned. A very similar feat was performed by the 52nd at Sabugal in 1811: and Harvey’s Portuguese brigade did as much at Albuera.
Much more, of course, was the square impregnable. When once safely placed in that formation, British troops habitually not only withstood cavalry charges at a standstill but made long movements over a battlefield inundated by the hostile cavalry. At Fuentes de Oñoro the Light Division, three British and two Portuguese squares, retreated at leisure for two miles while beset by four brigades of French cavalry, and reached the ground which they had been ordered to take up with a total loss of one killed and thirty-four wounded. Similarly, at El Bodon the square composed of the 5th and 77th retreated for six miles, in the face of two cavalry brigades which could never break into them. (For details see the chapter dealing with General Picton.)
Indeed, it may be stated, as a rule almost without exception, that troops in square, whether British or French, were never broken during the Peninsular War even by very desperate and gallant charges. One of the best instances of this general rule was the case of the combat of Barquilla, where two grenadier companies of the French 22nd, surprised while covering a foraging party by five squadrons of British cavalry, got away in a level country after having been charged successively by three squadrons of the 1st Hussars of the German Legion, the 16th and the 14th Light Dragoons. One of these three squadron-charges, at least (that of the 14th), had been pushed home so handsomely that an officer and nine men fell actually among the French front rank, and a French observer noted bayonets broken, and musket barrels deeply cut into by the sweeping blows of the light dragoons, who yet failed entirely to break in.
There was indeed only one extraordinary case of properly formed squares being broken during the whole war, a case as exceptional in one way as the disaster to Colborne’s brigade at Albuera was in the other. This was at the combat of Garcia Hernandez, on the morning after the Battle of Salamanca, where the heavy dragoons of the K.G.L. delivered what Foy (the French historian of the war) called the best charge that he had ever seen. The rear-guard of Marmont’s army had been formed of the one division which had not been seriously engaged in the battle, so that it could not be said to have been composed of shaken or demoralized troops. Nevertheless, two of its squares were actually broken by the legionary dragoons, though drawn up without haste or hurry on a hillside favourable for defensive action.
According to Beamish’s History of the German Legion, a work composed a few years later from the testimony of eye-witnesses, the first square was broken by a mortally wounded horse, carrying a dead rider, leaping right upon the kneeling front rank of the square, and bearing down half a dozen men by its struggles and kicking. An officer, Captain Gleichen, spurred his horse into the gap thus created, his men followed, a wedge was thrust into the square, and it broke up, the large majority of the men surrendering. The second square, belonging to the same regiment, the 6th Léger, was a little higher up the hillside than the first: it was a witness of the destruction of the sister-battalion, and seems to have been shaken by the sight: at any rate, when assailed a few minutes later by another squadron of the German dragoons, it gave a rather wild though destructive volley, and wavered at the moment of receiving the attack, bulging in at the first charge. This was, of course, fatal. The broken squares lost 1400 prisoners, beside some 200 killed and wounded. The victorious dragoons paid a fairly high price for their success, losing 4 officers and 50 men killed, and 2 officers, and 60 men wounded out of 700 present; the extraordinary proportion of killed to wounded, 54 to 62 marking the deadly effect of musketry at the closest possible quarters.