Home » Non Fiction » Napoleonic Period Warfare » Strategy,Tactics and Equipage » The Details of the Rocket System Employed by the British Army During the Napoleonic Wars 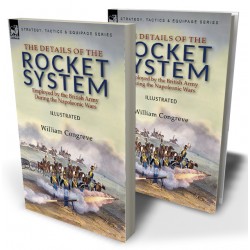 Congreve's own work on the effectiveness and operation of his rockets

In 1814 British Guards officer Rees Gronow took part in the Peninsula War action known as 'The Passage of the River Adour'. He wrote of his experiences during that battle in his reminiscences; 'Three or four regiments of French infantry were approaching rapidly when a well-directed fire of rockets fell amongst them. The consternation of the Frenchmen was such when these hissing, serpent-like projectiles descended, that a panic ensued and they retreated'. Congreve's invention had come to the battlefield. Though many of his contemporaries were either suspicious of his innovation or contemptuous of its potential, such was the effectiveness of well managed rockets that military arsenals would include them thereafter. Congreve's book describes his early rockets, the formation, equipment and practices of 'rocket troops' and the various applications for the use of rockets in different military scenarios. This Leonaur edition contains the illustrations which originally appeared in the book plus additional illustrations of early rocket troops. This is an essential book for those interested in the development of rocket warfare and for modellers, war-gamers and re-enactors.

Plate 1st represents the mode of equipment for carrying rockets on horseback, as it was arranged during the course of experiments, which were carried on, under my direction, at Bagshot, in 1811; as it was subsequently carried into actual service, under Captain Bogle, with the Allied armies in Germany, in the ever memorable campaign of 1813; and as it is at present proposed to equip the new corps of Rocket Horse Artillery, established on the 1st of January, 1814, by Earl Mulgrave, Master General of the Ordnance, and composed of two troops, under the command of Lieutenant Colonel Fisher, of the Royal Artillery.
The right hand figure represents a trooper completely armed and equipped, in review order. The left hand figure is a delineation of the same, with the shabracque removed, to shew the holsters in which the rockets are conveyed. These holsters each contain two 12-pounder rockets, each rocket armed with a 6-potinder shell, or case shot; they are connected together at top, and are supported by the pummel of the saddle, which is made in the hussar fashion, though the saddle itself is, in fact, formed and stuffed the same as a common English saddle.
This projection in front keeps the holsters clear of the horse’s withers and shoulders, which, from their size, it might otherwise be difficult to do; for the latter of these purposes, also, the flap of the saddle comes further forward than usual. The holsters, thus connected, slip on and off from the pummel with great facility, which is an object of importance, as a part of the service of the rocket trooper is, when from some impassable obstacle, he can no longer advance on horseback, to dismount and pass over such obstacle, with his ammunition holsters and chamber, on foot. The sticks, which are seven feet in length, and four in number, answering to the number of rockets, are collected in a bundle by means of a strap with four loops, contrived on purpose, and are carried on the off-side, the thicker ends being supported in a bucket, suspended from the flap of the saddle.
The strap above mentioned, as confining them together in the middle, leading across the man’s thigh to the peak of the saddle; by this means they fall naturally under his right arm, without at all incommoding him, either in mounting or dismounting, or even in going through the sword exercise. By this arrangement also, they are easily drawn from the bundle downwards, for fixing to the rocket, leaving any number that may remain as securely fixed as when the whole are in the quiver.
It has already been stated, that the men are told off in sections of threes. They are accordingly numbered 1, 2, and 3. Now numbers 1 and 3 have nothing to carry but their proportion of the ammunition, viz. four rockets and four sticks each, while No. 2 has in addition to carry the chamber from which the rockets of his section are discharged. This chamber is a small iron plate trough, about one foot six inches in length, capable of being fixed steadily in the ground by four iron points at the bottom of it, so that the rockets may be discharged parallel to the surface and close to it. The weight of this chamber, or bouche a feù, is about six lbs. and it is carried in a small leather case, shewn in both these figures, just at the back of the valise.
The men are armed with a sabre, which is in action suspended to the saddle, that they may not be incumbered in mounting and dismounting. Each man has besides a pistol in his cross belt, and a spear head in his holster, which may be occasionally fixed at the end of one of the rocket sticks, so as to give the further aid of a very formidable lance.
Instead of carrying slow match, which would be dangerous as well as inconvenient, the portfire is lighted in action by a flash of powder obtained from a pistol lock and pan, mounted on a small stock; and a light portfire stick for discharging the rocket, about three feet in length, is constructed of a thin iron tube, which shuts up, and is carried in the holster. The sticks are fastened in the loops on the rocket case, either by the gripe of a pair of pincers with points in them, or by the stroke of a small hammer with a point in the head, or by some equally simple tool. Every part of this equipment, except the sticks, is so completely concealed by the shabracque, that the rocket trooper has the appearance merely of a lancer.