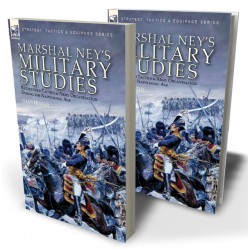 Warfare for the Age of Napoleon

Several of Napoleon's Marshals and senior officers wrote treatises on the waging of war based on their own experiences. For modern students of the history of that period these works give fascinating insights into the battlefield and campaign tactics of some of the most fascinating armies of comparatively modern times. Michel Ney fought during the Revolutionary Wars as a hussar and his early advances in rank were in cavalry commands. He received his marshal's baton in 1804 and fought many battles under the banner of the First Empire of the French including the fatal Russian Campaign and the Campaign of 1814 which led to the emperor's fall. Known as 'the bravest of the brave', Ney, having sworn allegiance to the restored Bourbon monarchy, then went over to his former master for the ill-fated 'Hundred Days', fighting at Quatre Bras and Waterloo. He was shot for treason in Paris in 1815. This book contains diagrams illustrating Ney's battle tactics and troop movements.

March or Attack by Echelons.
This manoeuvre is extremely advantageous in war; but it requires great perfection in the marching of the troops, in order that the attack upon the enemy may be supported with rapidity and intelligence, and that the battalions which refuse the attack may be in a fit state to execute attentively every movement which circumstances may require.
1
Eight battalions upon two lines having to attack the right wing of the enemy placed parallel to their front:—
The movement shall begin by the left at full distances, either by regiments or by battalions, whichever may be preferable. So soon as the last battalion of the first line has marched forward, it shall be followed by that of the second line, and so on by the remaining battalions.
In the supposition that the enemy refuses its right, and makes a demonstration of attack with its left upon the right flank of the echelons in march: in this case, all the battalions shall effect together a change of direction to the right by battalions; or for the sake of more compactness and greater celerity, a change of front upon the colour platoon of each battalion in the two lines, left wing forward.
This manoeuvre being performed, the battalions may continue the attack by echelons, or march forward and place themselves in line of battle upon the first battalions of the right of the two lines, which serve as pivots or points-d’appui. By this operation the two wings act alternately on the offensive. (This is a beautiful manoeuvre, and has been adopted in France.—S.)
If the attack were to be made on the left wing of the enemy’s line, the movement must begin by the right of the two attacking lines. The change of direction by battalions must be executed to the left; or the change of front made right wing forward.
2
If the commander wishes to attack with only the first line in echelons of battalions, either by the right or by the left, the battalions shall march at full distances, after the echelons are established; and if they were threatened with an attack by cavalry, each battalion should form into column of division at platoon distance, the right in front, upon the colour division of each battalion, if the movement were effected by the right of the line; or the left in front, if the movement were effected by the left of the line. This being done, the first division of each head of column would stand fast. The uneven platoons of the second and third divisions should then wheel to the right, and the even platoons wheel to the left. The fourth division should close up, and then face about so as to form squares by battalions placed in echelons.
3
The attack in echelons by the centre, is in general too dangerous a manoeuvre to be frequently used in war, unless the commander is certain that the enemy have imprudently weakened their centre to strengthen their wings; and that when he has reached the central position he can maintain it, cut off the enemy’s wings, and force them to give battle separately. This attack upon the centre requires great resolution and extreme celerity in the march of the assailants.
Let us suppose a first assailant line of eight battalions: in this case the battalions Nos. 4 and 5 shall begin to march at half distance; the other battalions shall in like manner follow at half distance, so that the movement may be better concentrated. It would be prudent not to make the second line march otherwise than in line of battle, in order that it may serve as a support to the two wings of the echelons of the first line, and be able to relieve the first line thus formed, and protect it in case of necessity.