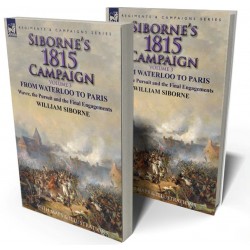 Wavre and the conflicts to the fall of Paris

He was now desirous of ascertaining whether the disposition and spirit of the enemy’s troops were at all commensurate with the extent of the works which he saw before him: and, with this view, he directed Bülow to make an attack, in the night of the 29th, with part of his Corps d’Armée, upon Aubervilliers. He also desired Zieten to support this attack, by raising as much alarm as possible in the villages of Bondy and Pontin.
Before the attack commenced, Blücher was joined by Wellington in person, who communicated to him the proposals which had been made by the French commissioners. Being already engaged in an important operation, he could not consent to suspend hostilities; and the two commanders agreed in opinion that, as long as Napoleon remained in Paris, they could not arrest their operations without insisting upon his being delivered up to them. Accordingly, the duke wrote a letter immediately to the commissioners to this effect.
Blücher confided the attack upon Aubervilliers to General Sydow, with the Thirteenth Brigade (nine battalions), together with one battalion of the Fourteenth Brigade, and two regiments of cavalry. The remainder of the Fourth Corps d’Armée was held under arms, in readiness to follow up any acquired advantage. Four battalions advanced in column, under Colonel Lettow, supported by the remaining five battalions. The arrangements, being made during the night, occupied some little time, so that twilight had set in when the attack commenced. Colonel Lettow penetrated the extensive village on three sides, forced the barriers, and carried every thing before him with the bayonet. The place had been occupied by one thousand of the enemy’s best troops; of whom two hundred were made prisoners, and the remainder pursued as far as the canal of St Denis.
General Sydow, accompanied by Major Lützow of the staff, immediately made a reconnaissance of the canal; and soon discovered that its opposite bank was lined with infantry in great force, and that the different points of passage were defended by batteries. Nevertheless he made the attempt to advance; but the troops were received with a vigorous fire of both artillery and musketry; and it soon became evident, that the enemy’s fortified position could not be taken except at a great sacrifice of both time and men. Sydow, therefore, limited his operations to the occupation of the captured village.
A simultaneous advance towards the canal was made, on the left of Aubervilliers, by the 3rd Battalion of the 1st Pomeranian Landwehr, and the 10th Regiment of Hussars; which maintained the communication with the First Corps. A sharp tiraillade took place, which terminated in the withdrawal of these troops to their former position.
By means of this reconnaissance it was made sufficiently manifest that the line of the canal of St Denis could not be carried without a serious assault, preluded by a heavy cannonade. It then became a question with the Allied commanders, who had thus, most fortunately, the opportunity of concerting measures in person. Whether it would not be advisable to endeavour to turn the enemy’s strongly fortified lines of St Denis and Montmartre, by masking those lines with one army, whilst the other should move off to the right, and cross to the left bank of the Seine, lower down the stream.
Although this movement would have the effect of extending and dividing the Allied forces, and consequently of augmenting the chances of success on the part of the enemy: should the latter possess the disposition and the means, not only of acting determinedly on the defensive, but also of assuming the offensive, accordingly as circumstances might favour the attempt; still any defeat of this kind was fully counterbalanced by the advantages which the plan presented. It cut off the entire communication with Normandy, from which Paris derived its chief supplies; whilst the approach of the Bavarian Army towards the opposite side was gradually limiting the resources of the capital in that quarter.
It enabled the commanders to present their forces simultaneously at different points: and thus, by continuing that display of vigour which had characterised their advance, they were far more likely to impose upon the morale of both the defeated army and the citizens, than by limiting their combined operations to the attack of the stronghold presented by the lines of St Denis; for to do this, would, in all probability, require time, and it was evident from the repeated proposals made by the French Government for a suspension of hostilities, that time was their great object, whether for the purpose of facilitating the collection and organisation of their resources, or in the hope of obtaining more favourable terms from the Allies.
It had also been tolerably well ascertained that, although fortified works had been thrown up on the right bank of the Seine, the defence of the left bank had been comparatively neglected. A further inducement towards the adoption of this plan arose from a report which was now received from Major Colomb, stating that although he had found the bridge of Chatou, leading to Malmaison, destroyed: he had hastened to that of St Germain, on hearing that it had not been injured; and succeeded in gaining possession of it at the very moment the French were on the point of effecting its destruction. The bridge of Maisons, still lower down the stream, was also taken and occupied.
No time was lost by the Prussian commander in taking advantage of the captured bridges across the Seine.
Books from this set
You may also like