The Cockade in the Sand 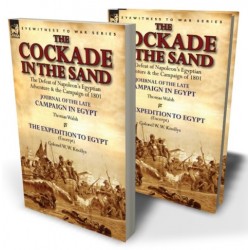 While there can be no doubt as to the colossal stature of Napoleon Bonaparte in world history, it is equally certain that, despite his genius as a strategist and military tactician, he was a fundamentally flawed character given to embarking on seemingly illogical endeavours—often with disastrous consequences in loss of life—for no realistically achievable gain. His ‘adventure’ into the Middle East and Egypt (a strategic cul-de-sac) with his ‘Armee d’Orient’ must rank in the forefront of those debacles. Nevertheless, Britain was at war with France and wherever the enemy was to be found it had to be engaged. Indeed, Nelson was able to inflict a decisive naval defeat on the French navy at the Battle of the Nile in 1798, and in 1801 a British force stormed ashore at Abukir Bay to engage French troops in Egypt. On the burning North African sands this force fought the by now abandoned French force (Napoleon had returned to France) inflicting a decisive defeat at Abukir itself, Mandora and finally at Alexandria—though with the loss of General Ralph Abercrombie who was killed in the final battle. This unique Leonaur book contains two essential works on the campaigns in Egypt. The principal piece is an outstanding history and first hand account of this little reported Napoleonic campaign, and the second is an illustrated historical overview by regarded military historian Colonel W. W. Knollys.
Leonaur editions are newly typeset and are not facsimiles; each title is available in softcover and hardback with dustjacket.

Our first operation was to dig wells; and to our great satisfaction, by sinking four or five feet deep, we found abundance of good water.
The French set fire to two of their gunboats on the inundation, and left them to drift among ours, with the intention of burning them: however, they blew up without doing any injury. In the evening, the enemy made a great show of cavalry in the plain, and posted vedettes close in our front.
A short time previous to our landing to the westward, a party of about one hundred Mamalukes, under Achmet Bey, reconnoitring near Marabout, fell in with a body of Arabs coming out of Alexandria, and a skirmish immediately ensued, in which Achmet Bey was unfortunately killed.
While affairs were in this state to the westward of Alexandria, Sir John Hutchinson had ordered an attack to be made along the whole of the enemy’s front to the eastward of the town. This movement took place about four in the morning, and was intended not only to gain ground, but as a diversion in favour of Major-General Coote.
The attack of a green hill, a little advanced on the right of the enemy’s position, was confided to Major-General Cradock; and the brigade under the command of General Doyle was destined to carry it into execution. The Thirtieth regiment was to march up to a small redoubt on the right, and the Fiftieth to another on the left; the Ninety-Second remaining in a central position in the rear, to support either, if necessary. The two battalions of the Twentieth were also placed in such a manner, as to be in readiness to move up to any point required.
On the left of the enemy there was a small hill of sand, called by us the Sugarloaf hill; of this Major-General Moore took possession with very little resistance; and thence he was enabled to reconnoitre the enemy’s works. This position, however, it was not possible to retain, as it lay completely exposed to the enemy’s cross fires, and from it’s size afforded little or no shelter.
The green hill was ascended by Major-General Cradock, without the loss of a man, the French having fled on our first appearance. But finding that we did not keep the ground, which we had gained on our right, they made an attempt to drive us from the green hill.
For this purpose five hundred men of the Seventy-Fifth demi-brigade, their colours flying, drums beating, and confident of success, moved with two guns rapidly across the plain, toward the post which the Thirtieth regiment occupied. They advanced with their bayonets fixed, and without firing a shot, till they got very close to the Thirtieth. That corps, though not more than two hundred men, did not wait their arrival; but, ordered by Colonel Spencer, and headed by Lieutenant-Colonel Lockhart, pushed forward, in the most gallant and intrepid manner, to meet the enemy, who immediately gave way, and were driven back to their entrenchments in the greatest confusion. They had several killed and wounded in their retreat, and eight men were taken prisoners, being literally dragged out of the ranks by our victorious troops.
When the enemy advanced to force the thirtieth regiment, the fiftieth, on the left, was ordered to move under the brow of the hill parallel to the canal, that it might be able to turn the right flank of the French, had they persisted in their attack.
During these movements, the French kept up a very warm and severe cannonade from their works, which cost us about forty men in killed and wounded. The manner in which their guns crossed each other in every direction was truly wonderful, and gave us an ample idea of the strength of their extensive lines.
Colonel Spencer, of the Fortieth regiment, had volunteered his services, and was actively employed with General Doyle’s brigade the whole of the day.
At five in the evening of the 18th, Major-General Coote moved forward about two miles, without any other opposition than a few shots exchanged between his advanced guard and the enemy.
He then took up his position in the following manner: the guards extending across the quarries in two lines, with their right to the inundation; and Majors-General Ludlow and Finch’s brigades formed en potence fronting the sea. Marabout was then left a little in our rear.
To the eastward of Alexandria, the advanced troops began to cover themselves, and in the night of the 17th, a battery of two guns was thrown up on the right, a little in front of a ruined mosque. On the green hill, the right hand work of the French was made to look toward the plain, and a trench was formed, to cover our right flank from the enfilading fire, to which it was exposed. About half after two on the morning of the 18th, the outposts on the right and left were attacked; but the enemy, not being in any force, was soon compelled to retire.
You may also like