Gonneville of the Cuirassiers: the Personal Recollections of a French Cavalryman of the First Empire 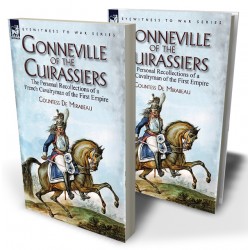 At war for the Emperor with the horsemen  of the Cuirassiers

Among students of the Napoleonic Wars there has long been an enthusiasm for the memoirs of soldiers of Napoleon’s army. Comparatively few books of this kind have been translated into English, though several have become well known and highly regarded. Some accounts have come from the pens of infantrymen, others from the ranks of the Imperial Guard and yet others from dashing light cavalrymen. This book, originally published in two substantial volumes and brought together in this special Leonaur edition, is quite different. It is the story, told in his own words, of De Gonneville, a heavy cavalryman—a cuirassier officer, and a member of an old Norman family. It offers modern readers a uniquely detailed insight into the activities of those armoured warriors who would charge into battle with legendary ferocity and elan. This highly recommended account of his military career, which hurls the reader into action very early in these pages. brought him into conflict with the Prussians and Austrians at Heilsberg and, most notably, in Spain  against the Spanish army on the eastern flank particularly at Sagunta. This Leonaur edition contains many illustrations and maps which were not present in original books.

The idea of escaping by the opposite side, which was perfectly open, never occurred to me; besides I could not very well think of it for I should not have known what direction to follow in an unknown country without made roads, and with a hundred and fifty horsemen on my track. There was nothing else to do but to force a passage through the midst of them, push them back beyond the fork of the road they had passed, despatch one or two of the best mounted men to our cantonments to give the alarm, and with the rest do the best I could in the almost desperate position in which I found myself.
If I could have gained the road leading to the bridge it is probable that the pursuit would not have been long, for the Prussians would not have cared to approach too near to our cantonments. But an officer, followed by two dragoons, was already in advance in the road by the side of the houses of the village, and this officer came in front of the hussars, and made signs with his hand that he wished to treat. I had not a moment to lose, for the space widened at the opening of the road the enemy’s column were coming up, and it was evident that if they reached that spot before I did, I should be surrounded, and lose all chance of safety. I said a word to my cuirassiers, made them draw swords, and charged at once. One thing came into my mind at this very serious moment, we had our cloaks, and from a distance they had taken us for dragoons because of our helmets; for the enemy’s cavalry coming from Culmsee, where they had spent the night, had watched our progress ever since we entered the plain.
So, we had been counted before the attack! Now some weeks since a division of dragoons, the Division Milhaud, had had two or three unfortunate affairs that had discredited this body in the eyes of the enemy, and gave them a confident expectation that they would any way have an easy victory. But in drawing swords, my men threw back the right side of the cloak over the shoulder, discovering their cuirasses, and cuirassiers had a colossal reputation. So, I observed a very distinct movement of hesitation in the head of the column; some hussars moved to the rear, and this put their troop in disorder, besides they were coming up without keeping their ranks.
The two dragoons, with the officer whom I have mentioned before, fired at me and missed me; I wounded one of them and passed on. We came to the hussars and literally passed over them. I do not think that four of them were left on their horses, they were so overthrown by us and by each other. We met the head of the dragoons just as they were entering on the bridge. They were so closely compacted together as naturally to form an obstacle which it was difficult to pass considering the depth of the column, and they found themselves stopped by us, while we having no resource but to regain the road, made a desperate resistance. During this struggle the hussars had passed to the other side of the palings that bounded the road and had fired on us across the palings.
I could not possibly look round, but on hearing the shots and the shouts that accompanied them, I easily imagined what was passing behind me. Indeed, I should probably have received the honour of the first of these shots had I not been engaged upon the bridge, and if they had not been in danger of hitting the dragoons by firing obliquely upon me. In order to get out of this position, it was absolutely necessary to mix ourselves up with the dragoons. I pressed my horse as much as I could without cruelty, he penetrated into their ranks, and for one moment I saw the senior sergeant by me, but we two were alone, and he soon fell.
Probably Providence had its share in the business, as far as concerned myself, for while I was still in the midst of the turmoil striking and guarding more with the hilt than the blade, I did not receive a single scratch. I took advantage of a weak spot on my right to get out, and turning my horse sharply to the right, forced the escarpment commanding the road we had come by, an attempt I should not have made under any other circumstances. This escarpment was nearly vertical, and at least fifteen feet high; but the snow that covered it was hard enough to give a foothold to my roughshod horse.
By good luck, at the moment I made the movement to the right I have spoken of, an old sergeant who had thrown himself forward to bar my passage, let his horse be caught in flank by mine, was thrown down and formed an obstacle that gave me time enough to prevent my horse being hamstrung when he made his first effort to climb the escarpment. But at this moment a pistol-shot struck me on the right side, the ball pierced my belt of two thicknesses of buff leather and penetrated into the flesh to the depth of its own diameter, without causing me more pain than a smart fillip. I felt I was hit and that was all.
After two or three violent efforts, during which I was very near falling back into the road, my horse reached the top of the escarpment, and I set off at the top of his speed, finding myself on the plain, in the direction of our cantonments. I had cast a glance backwards on the scene I was leaving, and had seen nothing but the remains of my poor detachment; the defeat was complete.