The Great Contest: Britain, Wellington & the War with Napoleonic France, 1800-1815 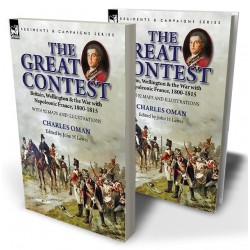 Britain’s war with Napoleon by Oman in a single volume

Those familiar with the outstanding scholarship of the historian Sir Charles William Chadwick Oman (1860-1946) may be confused by the title of this is a book for it is one that that Oman never actually wrote as a single work. Oman’s multi-volume history of the Peninsular War is a highly regarded account of the total conflict and has led to Oman’s work being considered the foremost authority on the subject since the publication of Sir William Napier’s magnum opus which first appeared in 1828. Oman’s single volume on the British Army under Wellington’s command is also regarded as a classic. This present volume has been created by assembling, in chronological order, four outstanding smaller works written by Oman. The text which opens and concludes the book is from his England in the Nineteenth Century (1899). Into this has been inserted Oman’s independently published, superbly concise history of the Peninsular War and his analysis of The Hundred Days Campaign, 1815. Included within the Waterloo Campaign section readers will discover Oman’s also independently published original and in depth research on the casualties sustained by the French army during the 1815 campaign which reveal the degree of engagement of regiments by an analysis of their losses in action. This unique Leonaur edition now enables students to read Oman’s assessment of the entire Napoleonic Age as it impacted upon Britain. These important texts have been enhanced by the inclusion of 92 maps and illustrations which did not accompany any of the original publications.