The Adventures of Captain Parquin 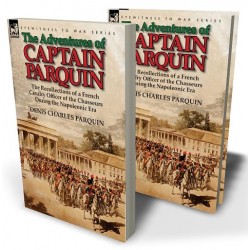 The gripping memoirs of a cavalry officer of the First Empire

This is the story of a remarkable French cavalryman of the Napoleonic era, Denis Charles Parquin, an officer of the Chasseurs a Cheval. Memoirs of soldiers of Napoleon’s army are always exciting, but few exist in English translation. Those that have been translated such as the recollections of Coignet, Barres, Bourgogne and Marbot have become famous and provide a valuable resource of first hand information. Parquin joined the 20th regiment of the horse chasseurs in 1806 and served with it until 1813 rising in rank to lieutenant. He fought at Saalfeld, Jena, Eylau, Wagram, in the Iberian Peninsula at Ciudad Rodrigo and at Salamanca, gathering wounds as well as regimental promotions. In 1813, Parquin agreed to take a reduction in rank to join the elite Chasseurs a Cheval of the Imperial Guard, where he became the emperor’s escort on the march and in the field. Napoleon personally awarded Parquin the cross of the Legion of Honour during a review in the same year. In the final battles of the First Empire Parquin fought at Leipzig, Hanau—where he was wounded—and during the battle for France in 1814, that led to the emperor’s abdication and the restoration of the Bourbon monarchy. There is some evidence that Parquin took part in the Battle of Waterloo—probably as a cuirassier. He remained in the cavalry under the royalist regime, but was eventually ruined by his involvement in Bonapartist conspiracies. This book concentrates on his life at its most exciting as he served as a ‘beau sabreur’ in the service of his beloved emperor. Included here are numerous illustrations (taken from the edition of these memoirs published as ‘Napoleon’s Victories’) that illuminate the narrative and add to the book’s reading enjoyment and value as a reference source and collectors’ edition.
Leonaur editions are newly typeset and are not facsimiles; each title is available in softcover and hardback with dustjacket.