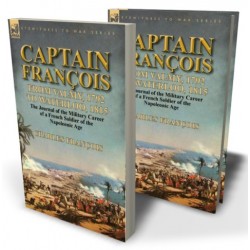 An authentic journal of a French soldier through many campaigns

The young Charles François rushed to fight for the cause of revolutionary France seeing action at Valmy. This was but the first of many campaigns and battles he would fight during the time of the Revolution, Consulate and the empire of Napoleon Bonaparte. This book contains a detailed account of the campaign in Egypt and Syria against the Mamelukes, Turks and ultimately the British under Abercrombie. This episode of François’ career is especially interesting since he joined the elite Dromedary Corps, a distinction for which he was known all his lifetime. Many more campaigns followed in Europe against the Russians and Austrians, followed by battles in Spain during the Peninsular War. Here François was taken prisoner, incarcerated in the hulks of Cadiz and took part in a daring and successful escape. Promoted to officer, he took part in the fateful Russian campaign, its appalling retreat and the battles to the fall of the empire. Predictably, François rallied to his master’s banner during ‘The Hundred Days’ and provides us with a rare personal account of the campaign of 1815 from the perspective of Grouchy’s column. An excellent first-hand account in every way.
Leonaur editions are newly typeset and are not facsimiles; each title is available in softcover and hardback with dustjacket.

Whilst Marshal Ney was engaged with Wellington at Quatre Bras—Quatre Chemins, François calls it—another portion of Napoleon’s forces attacked the Prussians at Ligny. The 30th and 96th Regiments were ordered to storm the village. They did enter, but came to a brook they could not cross, and exposed to a galling front and flank fire, were obliged to retreat with a loss of thirty officers and 700 men.
François writes:
Not for many a day had I fought with so much intrepidity, but I got no harm but a few slight bruises on the thighs and right leg. The disorder into which the enemy threw us made me curse my existence. I wanted to get killed, so angry was I to see a battle so badly ordered. There was no commander. We saw neither generals, nor staff-officers, nor aides-de-camp. The regiment was two-thirds destroyed, without receiving either supports or orders, and we were obliged to retreat in disorder, leaving our wounded comrades, and try to rally near our batteries, which were pounding those of the enemy.
Captain Christophe and I rallied the remains of the regiment, and, I can say to my glory, the soldiers were glad to see me again amongst them; and asked me to lead them into the fight once more. In spite of the check we had received, we had taken about 500 prisoners. Just as we were trying to get the regiment together, General Rôme arrived, and ordered us to re-enter the village of Ligny. The soldiers, not at all disturbed by their failure, nor alarmed at the loss of nearly two-thirds of their comrades, cried ‘Vive l’Empereur!’ and marched forward. Captain Christophe sounded the charge; the battalion entered the village and was repulsed. He rallied the men and tried three times with the like result.
Then General Rôme ordered Captain Christophe and me to assemble the men behind the batteries of the division, which had not ceased firing; about 200 men assembled. General Rôme, seeing their courage, ordered me to take 100 men (they all wanted to follow me) and make a fresh attempt. These 100 soldiers, glad to see me at their head, cried, ‘Long live the Emperor and Captain François!’ I was proud of their confidence, and General Rôme said some very flattering things to me on the subject. We arrived at the hollow road which led to the village. The enemy’s fire had greatly diminished. I ordered silence. Just as we were about to enter the village, we met a company of Prussians commanded by an officer; we were both surprised at finding ourselves so close to each other. I hit General Rôme’s horse on the nose with my sword, for he was right in front of my men, and the general squeezed as close to the bank as he could.
I stooped down, and gave the command, ‘Ready, Present, Fire!’ The Prussians did the same, and though I was in front I was not hit. But there were dead and wounded on both sides. I was hit by a bullet, but it was stopped by my cloak, which was in a tight roll over one shoulder and across my body. I found the bullet afterwards in my cloak. All it had done was to give me a bruise on the left breast; but that made me spit blood for several days. I ordered my men to charge with the bayonet; the enemy defended himself, and for some minutes the carnage was terrible. In parrying the thrusts that were made at me, my sword broke. At last I was knocked down by the crowd, and trampled under foot by my own men and the enemy. At that moment. General Rôme ordered the 96th Regiment to advance. The enemy fled. I was picked up, along with several of my wounded soldiers, who had not abandoned me.
I was badly bruised in many places by being trampled under foot, but I rejoined the regiment, which was posted behind our batteries. I had seven men killed and eleven wounded, but most of them slightly. I was only stunned, and was able to get back to the regiment, upon which the enemy was still firing.
A little later, the village was taken, the centre of the enemy’s army thrown into disorder, and the Duke of Brunswick killed. During the night I learned that we had gained the battle, taken forty guns and eight flags, and done prodigies of valour. So, in spite of the want of unison and order, the troops of all sorts had done their duty, and, for my part, I had done mine.
The regiment consisted of 467 men, officers included, and was commanded by Captain Christophe and myself. General Rôme brought us our orders that evening. On seeing me, he said:
‘Is that you, my brave captain? I am glad to see you again.’ He shook hands with me, and asked—‘How are you?’
‘All right, General, barring a few kicks and bruises.’
‘Rest yourself,’ he said.
‘No, General! The emperor has need of all his soldiers, and I can still lend a helping hand.’
The general shook hands with me, and promised that he would stand my friend. As a matter of fact, the next day, on the march, he handed me a certificate signed by him and General Pécheux, and advised me to present it to the emperor on the first occasion. But I never saw Napoleon again, and during the retreat I lost the certificate, my portmanteau, and my orderly; who deserted, and carried off all my property.
You may also like