With the Tsar Against Napoleon: the Recollections of Louis Rochechouart with Russian Forces During the Revolutionary & Napoleonic Period 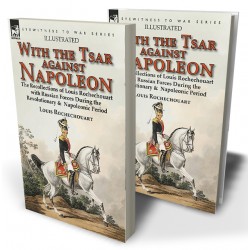 The incredible adventures of a French Royalist officer

This is a personal account of the Napoleonic Wars from a rare perspective. The author was a French aristocrat and royalist who fled from Paris as a child after his mother was discovered to be involved in the plot to free Marie-Antoinette. He joined an emigre regiment at an early age and fought with the Portuguese. He later joined the Russian Army, eventually becoming an aide-de-camp to the Tsar, Alexander I. When France invaded Russia in 1812, Rochechouart was mobilised to Tormassov’s Russian army fighting at the capture of Minsk and at the Berezina where he witnessed the debacle of the river crossing by the French Army in retreat. He fought in the final battles in Germany which brought about the defeat of Napoleon including Lutzen, Dresden, Kulm and Leipzig, and also in the Six Days Campaign as the allied forces closed upon Paris itself. He became Military Governor of Paris, holding the post until 1821, and was present at the execution of Marshal Ney. This is a fascinating memoir from the perspective of a French nobleman who opposed the First Empire of the French and its emperor. Contains maps and illustrations not present in earlier editions of the book.

On the morning of November 29th, the admiral organised his advance-guard, composed entirely of Cossacks; these were to move on the left flank of the French Army, and prevent it from turning to that side, where there were better roads and, above all, abundant provisions; while our main army corps pursued them closely. In spite of the total devastation of the country (we found all the houses burnt) we were fortunately not short of supplies, and our horses received regularly their ration of oats and fodder; moreover, they were rough-shod, according to the custom in cold countries.
On the 30th, I found myself at the place where the French Army had effected a crossing. Nothing could be more sad, more heartbreaking. We saw heaped up the dead bodies of men, women, and even children, soldiers of all arms, and of all nationalities, frozen, suffocated by the crush of fugitives, or mown down by the Russian grapeshot; horses, carriages, cannon, caissons, wagons, abandoned. It is impossible to imagine a more appalling scene than the two broken bridges with the river, frozen to its lowest depth. Immense treasures lay scattered over this region of death; peasants and Cossacks prowled around these fragments of bodies, carrying off whatever was most precious. I found my servant ransacking a carriage; he said he was looking for shirts, handkerchiefs, stockings, etc., to replenish my wardrobe, since, through his fault, everything had been taken. . . . (A few of the more painful details have been omitted from the translation.—Tr.)
Both sides of the road were strewn with dead, frozen in every attitude, or with men dying of cold, hunger, and fatigue, with their clothing in rags; they begged us to take them prisoners, and enumerated all the things they could do. “We were assailed with cries: “Monsieur, take me with you, I can cook,” or “I am a valet,” or “a hairdresser,” “for the love of God give me a morsel of bread, and any rags to cover me.” In spite of our great wish to do so, we could not help them.
The Langeron division pursued the French Army so closely that our quartermasters arrived at Studianska before the officers of Napoleon’s staff had left the only house remaining intact; we had, therefore, every interest in keeping it from destruction, and by a mutual agreement the Russian General Staff was allowed to make it their headquarters. All the other houses were pillaged and burnt; the French burned the villages that had sheltered them for the night, in order to check our pursuit. The room occupied by Napoleon was assigned to the Comte de Langeron; the aides-de-camp, and officers of the staff, divided the other rooms among them.
We usually found written in chalk over the door the names of the orderly officers who had occupied the room before us. My comrades pointed out to me the name “Baron de Mortemart” over a door. It was evidently Casimir Duc de Mortemart, (the playfellow of de Rochechouart when they were little boys together in England.—Tr.); the emperor, only recognising titles that he himself had given, had created him a baron. The room was assigned to me; thus, it had been occupied by a Rochechouart, aide-de-camp to the Emperor of the French, and then by a Rochechouart, aide-de-camp to the Emperor of Russia. This curious coincidence was continued until we reached Smorghoni.
After December 1st, there was no more thought of fighting, but only of marching as quickly as possible to Vilna, where the French counted upon finding provisions, boots, and clothing. The Russians pursued them, to drive them out of their territory. As long as I live, I shall never forget the misery we saw, the cries of pain we heard, without being able to render succour. This distressing scene was renewed every day, every moment, yet it was impossible to hear these despairing cries without deep emotion.
At Smorghoni I met three aides-de-camp to the Emperor Alexander: Count Stanislas Potocki, Count Braniki, and Lamsdorf, son of the tutor of the Grand Dukes Nicholas and Michael, the younger brothers of the emperor. The first two, who were very rich, had brought with them abundant provisions— wines, liqueurs, sugar, tea, etc. They very kindly suggested to Lamsdorf and me that we four should mess together, an offer we gratefully accepted. M. de Langeron gave me a horse, I bought a little sledge from a Jew, and put my servant and my modest baggage in it; my faithful Cossack led my saddle-horse, and, overcome with the cold, I shut myself into Lamsdorf’s carriage, which was fixed on a sledge.
At Osumiana we were joined by M. de Vlodeck, also an aide-de-camp to the emperor. He came from the General Headquarters, which could not follow the French as quickly as we could, for it was impossible to take the troops along a route which had been so completely ravaged, burned and devastated. M. de Vlodeck obtained permission to join the advance-guard, and came to us. Kutusoff’s army, leaving the road, threw itself to the right and left; it thus found some provisions, but, like us, it suffered from the intense cold.
At Osumiana I witnessed several incidents which complete the picture of the sufferings endured by the remnant of the finest and bravest army in the world. I went into a kartchma, a tavern kept by a Jew. I wanted a sheepskin coat for my servant. I saw two men, unaccountably thin, whose clothing consisted of drawers, torn stockings, no shoes, a wretched vest, no shirt, and on their heads a black silk stocking with the foot hanging down negligently behind.