Bravo, Young Buffs!—The Recollections of an Officer of the 31st (Huntingdonshire) Regiment of Foot During the Peninsular War 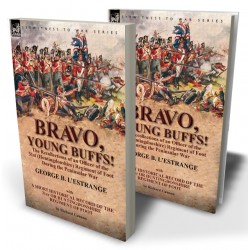 The 31st (Huntingdonshire) Regiment of Foot earned their title of the Young Buffs at Dettingen, where George II, mistook them by their ‘buff’ coloured uniform facings for the 3rd Regiment—the original Buffs. The two regiments were later destined to share their fortunes on the field of battle during the Peninsular War at the bloody affair that was the Battle of Albuera and at Talavera and Vitoria. This book was written by an officer of ‘The Young Buffs’ and describes his experiences on campaign in Spain and through the campaign in the south of France to the conclusion of the war upon the fall of Napoleon and the restoration of the Bourbon monarchy. L’Estrange writes his recollections in a personable and entertaining style, which not only provides essential source information about the campaign, the battles and his regiment, but also rewards the reader with an intimate insight into the adventures of a young British Army man at war against the French during the Napoleonic Wars. Further information concerning the activities of the 31st Foot during this period (including actions where L’Estrange was not present) is included in a short history of the regiment by Richard Cannon which has been appended to this Leonaur edition.

As we approached the wood, the fire from it slackened, and we entered and passed through without meeting much opposition; but when we emerged at the opposite side, we saw the dark line of the French army, still in their position, within point-blank distance. A perfect hailstorm of bullets was poured down upon us, which, if it had lasted, must have swept us all into eternity. But we pushed forward, and the French turned. Looking to my right, I saw my captain, Girdlestone, wounded and supported by the bugler. I rushed over to him; he seized me by the hand, gave it a hard squeeze, and said to me, “Go on, my boy! your name will be mentioned.”
I felt a certain choking sensation in my throat; a tear swelled into my eye, but it had not time to fall. I ran on frantically to the front, screaming at the top of my voice, “Come on, 31st!” which cry could not have reached the ears of the half of my company, in consequence of the roar of the battle. But these brave fellows did not require to be called to advance; the only difficulty was to keep them back.
The bugler, whose name was Butterworth, whom I had left supporting Girdlestone, had again joined, and continued to sound the advance, which he never for a moment omitted to do from the time the word was given. I was parched with thirst from the heat and excitement, when an officer attached to the light company of the Buffs, seeing me panting for breath, dipped his hand, on which was a thick glove, into a ditch, which was more blood than water, and passed it across my mouth, which greatly refreshed me. By the wound of Girdlestone I found myself placed in command of the light company of the 31st, who had been through the greater part of the Peninsular War, and, though reduced in numbers, were as gallant a lot of men as ever existed.
I began to feel that, at the age of sixteen, I was placed in a very responsible position, and determined to keep myself as cool and steady as was possible. I had hardly time to make this determination when I heard a tremendous rush on our left; the ground seemed actually to quake under me, and, looking in the direction of the sound, I saw the whole British host—artillery, cavalry, and infantry—throwing themselves on the line of the French Army. Three or four regiments of cavalry were at the moment charging, and galloped up to the foot of the eminence on which the French line stood; it was too steep for the horses to ascend, and they were obliged to wheel. But the firm and uncompromising style in which the British Army advanced was too much for the nerves of the French; they turned in retreat along their whole line, and the Battle of Vittoria was won.
For the rest of the day it was easy work for us. In looking towards the town of Vittoria, I saw a moving mass of all sorts of vehicles retiring over the plain; it was the whole of the matériel of the French army, their baggage and their plunder. Notwithstanding their hasty retreat, the whole fell into the hands of Lord Wellington’s army. Here was taken the famous Berlin, fitted up with every convenience and luxury, with silver and Sèvres china: this was the travelling-carriage of King Joseph, and which in after-years delighted the eyes of our children at Madame Tussaud’s. The battle had raged to a much more intense degree far away to our left, in the neighbourhood of the town of Vittoria, and in some instances swept right through it; but, as I did not see it, I will not pretend to describe it. It has now become a matter of history, from Lord Wellington’s despatches and other competent authorities.
Indeed, we were ignorant of almost every detail of the action, save those which passed under our own observation, until we received the English newspapers some time afterwards; but it is well known how complete was the defeat: 150 guns, the whole of Joseph Buonaparte’s personal baggage, and, as I before observed, his carriage, fell into the hands of our army. I regret to say, but am scarcely surprised at it, that there were some breaches of discipline,—now known under the Indian name of “looting,”—which were severely censured, and in some instances punished; but it would be invidious to name any particular regiment after all had otherwise behaved so well.
You may also like