The March to Hougoumont: Lord Saltoun & the First Guards from Sicily, Walcheren and the Peninsular War to Waterloo, 1805-15 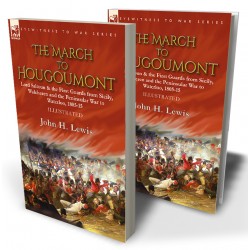 This is the story of an elite infantry regiment of the British Army; the First Regiment of Foot Guards—which became the Grenadier Guards, during a particularly active and significant period of its long and illustrious history. It also is the story of a young man who served with the Guards as an officer, Alexander Fraser, Lord Saltoun, principally recounted through his journals and correspondence. It is a story of wars and campaigns fought against the First Empire of the French under the enigmatic leadership of Napoleon Bonaparte, and so it also concerns the emperor’s nemesis the Duke of Wellington. All these elements are drawn together in these pages. Saltoun and his regiment marched for a decade on roads that ran through Sicily, the Peninsular War in Portugal, Spain and France and the Low Countries, until they arrived at a cataclysmic rendezvous during which, over a three day period in 1815, they took part in the most famous battles in the annals of British conflict at Quatre Bras and Waterloo. Saltoun fought in both battles, notably in the defence of Hougoumont, a chateau-farm transformed into a bastion and the key of the right of Wellington’s defensive line at Waterloo, but also within the squares beleaguered by French cavalry and in the final attack that brought the Imperial Guard and Napoleon’s plans to ruin. Quite unpredictably this fascinating account also involves a love story. Includes many illustrations, including new three-dimensional views of Hougoumont which were created especially for this book.

This Leonaur original title is available in softcover and hardback with dustjacket.

It was during the cavalry attack that James Lord Hay, (eldest son of the Earl of Erroll), an ensign of the First Guards and aide-de-camp to General Maitland, was killed. He was temporarily acting as adjutant to Saltoun who, noting that his young friend was mounted on a well-bred horse, advised him not delay in going down a narrow path leading into the wood before the French cavalry came close, in case his charger, which was of a type inclined to be skittish, refused when it found itself in an awkward place.
Hay replied there was no fear of that, because the horse, ‘was such a perfect hunter’. The two officers stayed together until the time came for them both to go down the path, whereupon Hay’s horse, as forecast, refused, reared, and attempted to turn about.
A man’s body, at that instant, fell across the neck of Saltoun’s horse and rolled off to the ground. He could not immediately identify who it was and called out, ‘Who’s that?’ Whereupon one of his men nearby answered, ‘It’s Lord Hay; but I shot the man that shot him.’ The momentary delay had enabled a French cavalry skirmisher to accurately fire at Hay killing him instantly. He was only eighteen years old, so that he had been promptly avenged was of cold comfort. Meanwhile, the Brunswickers, who had managed to form square, opened fire upon the passing cavalry increasing the rate of its destruction. Prisoners were taken and several riderless horses were gathered as fresh chargers for the Guards field officers.
The firing continued for as long as daylight lasted, but as the evening came on Maitland led the third battalion forward beyond the outskirts of the wood and threw out a line of picquets in his front for the night. Each army reluctantly drew apart like exhausted equally matched pugilists. Colonel Stables brought the second battalion out of action and moved his men to the chaussée, at the end of the wood, where they could briefly rest.
Later Maitland wrote a report of the action addressed to the Duke of York:—
It was at Quatre Bras that the (First) Brigade came in contact with the enemy. Here they arrived very opportunely after a march of twenty-six miles. At that moment the French with two battalions had occupied a wood, which extends from the road leading from Nivelles to Quatre Bras, about a mile and a half to the right. Had the enemy maintained himself here, he would have cut off the communication between Lord Hill and the corps of the Prince of Orange. The brigade formed across the wood, advanced (with bayonets fixed and cheering), and drove the enemy entirely from the post. He, however, continued to harass us, and to make frequent attempts to regain the wood, with a reserve of three battalions on the right of the wood, which is long but not broad, and with two pieces of artillery at the extremity. He also pushed on a corps on our left which attempted to cut us off from the high road, but all his efforts were rendered vain by the spirited resistance of the brigade. I caused the brigade to advance frequently against the last-mentioned corps of the enemy, and as frequently drove them back.