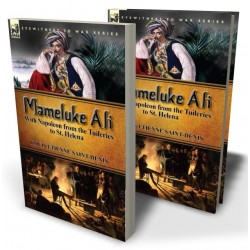 Napoleon Bonaparte’s adventure in the Middle East brought him in close contact with the Mamelukes—the dominant military caste of Egypt at the close of the 18th century. As students of the period know, despite the fact that the French inflicted devastating defeats on the Mamelukes, their exotic ‘oriental’ appearance appealed to a European sense of romance to the degree that Mameluke cavalry took their place in the Imperial Guard. Napoleon notably enrolled a Mameluke, Roustan Raza, as his bodyguard and valet. There was also a second valet, known as ‘Ali’, in the emperor’s service, who was in reality a Frenchman. Louis-Etienne Saint-Denis was born in Versailles in 1788 where his father was an overseer in the royal stables. In common with several servants who occupied a position close to the person of Napoleon, Saint-Denis, ‘the French Mameluke’, has left us an essential view of the private and intimate world of the emperor’s domestic, political and military life. An indispensable addition to every library of the Napoleonic age.
Leonaur editions are newly typeset and are not facsimiles; each title is available in softcover and hardback with dustjacket.