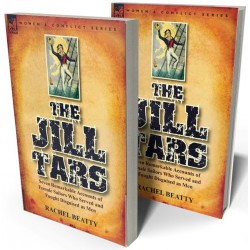 Accounts of seven intrepid women sailors of the Age of Sail

There are several notable instances and written accounts of women who have disguised themselves as men and joined the armies of their times to fight for patriotism, adventure or to follow a husband or lover to war. Mother Ross, who fought as a dragoon in Marlborough’s ranks at Blenheim and many other engagements is a well known example, although there have been recorded instances of ‘women-soldiers’ throughout history. This book follows the fortunes of women who followed in the steps of those marching ladies, but who disguised themselves as sailors and took to the seaways. Some fought for the Royal Navy while others—whose names have become infamous—sailed under the ‘black flag’ as pirates. This special Leonaur edition chronicles the exciting careers of seven women who served, sailed and fought disguised as men. Here readers will discover Anne Bonny, a pirate who became as well known as Blackbeard, together with the less well known Mary Ann Talbot, Mary Read, Emma Cole and others.