Recollections of Caulaincourt, Duke of Vicenza: Soldier, Commander, Diplomat and Aide to Napoleon—Both Volumes in One Special Edition 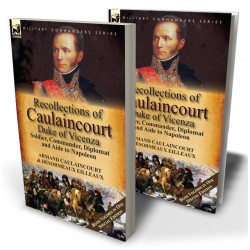 Armand Caulaincourt was a principal figure of the Napoleonic epoch. Born in 1773, he was serving in the army of France at the age of 15. By 1801, he had been swept up by the tide of French revolution and politics, had risen in rank, been reduced to common soldier, risen again to colonel and twice suffered wounds in his thirteen campaigns. Becoming an aide to Napoleon, Caulaincourt’s fortunes prospered during the imperial period and led to his becoming Duke of Vicenza in 1808. He strongly advised Napoleon not to invade Russia, but was ignored. He served during the Russian Campaign as Grand Ecuyer to the emperor being present at Borodino and upon the retreat from Moscow until Napoleon left the doomed army. Caulaincourt accompanied Napoleon on his return to France, becoming Grand Marshal of the Palace following the death of Duroc. The remainder of his career was spent engaged in diplomacy for which he had a considerable talent, particularly impressing Tsar Alexander I who subsequently used his influence to save Caulaincourt from arrest and execution following the Hundred Days. This good value Leonaur edition of the life of this outstanding man, contains the complete text of both volumes as they were originally published.