The Grandest Battle: the Campaign of Ulm and Austerlitz, 1805 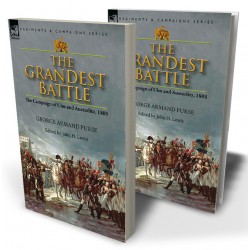 In 1805, Napoleon and his Grand Army stood on the northern coast of France poised to cross the English Channel to invade England. To affect a successful landing the French required control of the narrow seaway which remained indisputably and infuriatingly dominated by the Royal Navy. Thus thwarted, the French Army turned about, marching eastwards towards the Danube. This book describes in thorough detail the brilliantly conceived and fought campaign that included the Battle of Austerlitz on December 2nd, 1805, which effectively ended the War of the Third Coalition with a decisive French victory. Indeed, Napoleon proclaimed it as his, ‘grandest battle’. When first published in 1905 this book was titled ‘A Hundred Years Ago: Battles by Land and Sea: Ulm, Trafalgar, Austerlitz’. This Leonaur edition has been edited to concentrate entirely on the land campaign to give the text greater focus for students of the campaigns of French Napoleonic armies. The role of undiminished British sea-power was strategically pivotal in the war against France, however the Battle of Trafalgar was fought after the campaign of 1805 had been launched and had no immediate influence upon it, so the centenary of the original publication to the naval battle is no longer relevant. This edition contains maps and illustrations which did not accompany original editions of the text.

Prince John of Liechtenstein had, after a time, completed the deployment of his numerous squadrons, and intended to take part in the battle, but he was met by Nansouty’s division. Whilst the Prince was aligning his forces, Nansouty had ranged his division into two lines, but, careful not to be outflanked, he bid the carabineers take ground to their right. When they had got sufficiently far in that direction, he wheeled them into line and moved forward. The Russian guns opened and inflicted heavy losses on the French, but did not stop them for a moment. The Russians withdrew their guns, and Nansouty, deeming his men sufficiently close, made a most brilliant charge. Liechtenstein’s first line was hurled back on the second, which advanced in its turn. The 2nd and 3rd Cuirassiers came to the assistance of the Carabineers, and defeated the second line of the Austrian cavalry. The enemy’s squadrons were disordered and destroyed, and only rallied on the other side of a brook under the protection of a powerful artillery fire.
This charge of Nansouty separated Liechtenstein from Prince Bagration’s corps. After this combat, the French horsemen were reformed in rear of Caffarelli, and were soon rejoined by the 3rd Cuirassiers who, having ventured too far, had been vigorously repulsed.
For all that, Liechtenstein did not consider himself quite beaten; if he could do no more, he at least strove to check or retard the success of the French. Having reformed his cavalry into two lines, he attempted an attack on Caffarelli’s right, but Caffarelli stopped him by a deadly fire. Nansouty then trotted out his heavy horsemen, and, passing through the intervals of the infantry, deployed in two lines and attacked the enemy. The Austrians were overturned, their first line being driven on to their second.
It was now the turn of Nansouty’s second line; the squadrons advanced and delivered three charges, the enemy losing heavily; being overthrown and broken, the Austrians retired. This movement, besides dividing the allied army into two, gave the French possession of the heights of Kruh and Holubitz which led to the fall of the two villages of that name. In this charge the French captured eight guns and routed completely all the troops on the left of the main road. Nansouty’s loss was relatively not very considerable.
Whilst Kellermann was engaged with the enemy’s cavalry, Lannes was gaining ground. Suchet was pushing forward in the direction of Kowalowitz, bent on overlapping Bagration’s right. Caffarelli followed along the high-road.
After a desperate resistance, Blasowitz had been carried by Lannes’ right and Bernadotte’s left. As the 17th regiment was in the act of escorting to the rear 1,200 prisoners captured in Blasowitz, and disarming an Austrian battalion, a body of Russian dragoons suddenly appeared beyond the right of that regiment. General Debilly promptly threw the 17th and 61st into square, and as the Russians charged, they came under the cross-fire of the two- squares. They were taken aback, disorganised, and decimated by this warm reception.
Two mishaps occurred at this time: the Russian dragoons, striving to find an escape, fell on the Austrians, whom they had failed to recognise. Murat, taking them for Bavarians, had, ordered the fire to cease. The Russian horsemen came up quite close to where he was before the error was detected, and, but for a timely charge at the head of his escort, the great cavalry leader would have been captured.
Dumas writes:
“The combat of Lannes and Bernadotte on the left, was remarkable for the complete success with which the troops, arranged in the order prescribed by Napoleon, baffled all the efforts of the allies whose numerous and magnificent cavalry had there a full opportunity of acting. The first line was uniformly drawn up in battle array, the second in battalion squares, the artillery and light horse in front, with the heavy cavalry deployed in several lines in rear of the whole. Thus, if a charge of horse, which was frequently the case, broke the first array, it passed, while disordered by success, through the intervals between the squares in the rear, from whose front and flanks it sustained a heavy fire. If they escaped that, the horsemen were suddenly assailed, when blown and dispersed, by a solid mass of heavy cavalry in the rear, which never failed to bring them back in confusion through the squares, who by this time had reloaded their pieces, and whose flanking fire completed the destruction of their gallant assailants.”