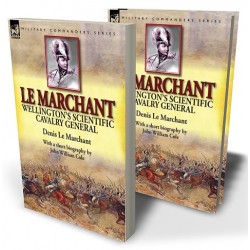 Guernsey born John Gaspard Le Marchant was an intellectual born before his time. He had a gift for languages, was a competent musician and a talented water colourist. Nevertheless, he chose a career as a soldier and cavalryman, perhaps unusually, since cavalry officers of the late 18th and early 19th centuries were not noted for their intellect. In common with many officers who were associated with the Duke of Wellington in the battles against Napoleon’s First Empire, Le Marchant first saw action against the French Revolutionary armies in the Low Countries. The campaign was a debacle, but it caused Le Marchant to consider the formation, drill, equipment and tactical methods employed by the British army in the field, and resulted in his authorship of a number of important treatises on these subjects. These works were particularly well received by the Duke of York and this led to royal patronage and the adoption of several Le Marchant’s ideas. His greatest achievement was certainly the creation of the Royal Military College, and his vision of a training school for military officers gave rise not only to Sandhurst, but also West Point and a number of other institutions created on his model internationally. His promotion to major-general excluded him from academic life and he was given command of a brigade of heavy cavalry in the Peninsular War, where he was, predictably, as effective in the field as he was in all his endeavours. Le Marchant fell, sabre in hand among enemy ranks, at the Battle of Salamanca having instituted a brilliant manoeuvre of cavalry which almost certainly sealed what is recognised as one of Wellington’s greatest victories. This biography of by Le Marchant’s son is accompanied in this special Leonaur edition by a short biography of Le Marchant’s military career by historian, John William Cole.
Leonaur editions are newly typeset and are not facsimiles; each title is available in softcover and hardback with dustjacket.

Compan’s division, while showing itself worthy of such an important enterprise, paid dearly for the honour. About a thousand of our soldiers fell in the attack, of which more than half were left dead in the entrenchments which they had so gloriously taken. On the morrow the emperor, reviewing the 61st Regiment, which had suffered most, asked the colonel what he had done with one of his battalions: “Sire,” replied he, “it is in the redoubt!”
This affair was merely the prelude to a great battle. Before commencing it Napoleon attempted to manoeuvre and turn the Russian left wing; but in order to anticipate our attack they had placed the whole of Titschkoff’s corps (third) and the Moscow militia in ambush behind dense brushwood, which covered their extreme left, while the second, fourth, and sixth corps of the enemy formed in the rear two lines of infantry protected by the works which connected the woods with the great redoubt, In spite of these obstacles our voltigeurs recommenced the combat with renewed desperation, and although the day was near its close, the firing on both sides continued with equal fury. At the same time several villages set on fire upon the right, cast a lurid and frightful glare over the scene. The shouts of the combatants, the iron and flame belched from a hundred brazen mouths, spread death and destruction in all directions; the soldiers of our corps, all ranged in order of battle, were mown down by a murderous fire; and without flinching closed up their ranks when a shot destroyed some of their comrades.
The darkening of the night relaxed the fusillade without relaxing our ardour; but each of us, uncertain of the effect of his efforts, thought it better to reserve his strength and ammunition for the morrow. Hardly had firing ceased when the Russians, encamped as on an amphitheatre, lighted innumerable fires. This illumination, resplendent and almost symmetrical, gave to the hills an aspect of enchantment, and formed an extraordinary contrast to our bivouacs, where the soldiers, in the absence of firewood, lay in the midst of utter darkness, hearing nothing on all sides but the groans of the wounded.
Our headquarters were established on the spot where the Italian Guard was placed in reserve. Each man, with brushwood for his bed, sought repose after the fatigues of the day, and slept profoundly, in spite of a high wind and an extremely cold rain. Towards midnight I was awakened on a summons from the chief of our staff, who told me that the emperor wished to have the plan of the ground on which we were encamped. I handed the plan to the viceroy, who immediately sent it to the emperor. At dawn on the following day (6th September) the prince ordered me to correct this plan, by traversing the whole of our line, and endeavouring to approach the enemy as closely as possible, so as to discover the character of the ground upon which he was entrenched, and above all carefully to observe if there were any masked batteries or ravines which were unknown to us.
Armed with these instructions I set out, and ascertained that the Russian camp was situated behind the River Kologha, upon a very confined plateau; and that their left was much weakened by the loss of the redoubt which we had taken on the previous day. Facing us was the village of Borodino, a very strong position, situated at the junction of a rivulet with the Kologha. Upon the plateau were two large redoubts, separated from each other by a distance of about three thousand six hundred feet. The one in the centre had fired on us the previous evening; the one on the left was erected on the ruins of a hamlet which had been destroyed to make room for artillery. This last communicated with Borodino by three bridges thrown across the Kologha, so that that village and the rivulet which separated it from us served as the enemy’s first line.
On our extreme left the Italian cavalry had crossed this rivulet, but Borodino, situated on a height, remained guarded by a strong body of the enemy. The whole of this ground was exposed to the fire of their principal redoubts, as well as to that of several other smaller ones masked along the course of the river. As to our right, it will be understood that our success of the previous evening had enabled us to approach Kutusoff’s extreme left, and to advance the greater part of our troops quite close to the plateau on which was situated the great redoubt.
We passed the rest of the day in carefully reconnoitring the Russian position. General Danthouard had fortifications reconstructed which seemed to him to have been placed too far back; upon the left there were also erected breastworks suitable for mounting batteries of guns. At last all was ready for commencing a decisive engagement, when towards evening the emperor sent a proclamation to the leader of each corps, with instructions to read it to the soldiers on the morrow, provided the battle then took place. For though the position was well chosen and of great strength, the enemy had so often eluded us, that it was to be feared that he might repeat the tactics adopted at Witepsk and Valontina. Here, however, the long marches and the separation from our reserves had at last equalised the forces of the two combatants; and, moreover, it was absolutely necessary for the Muscovites to fight if they wished to save their capital, from which we were now only twenty-six leagues distant.
You may also like