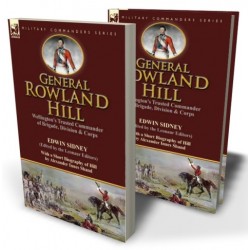 The career of one of Wellington’s most successful generals

If Napoleon could be accused of delegating too much responsibility to subordinates incapable of delivering the results he expected, then Wellington could be regarded as the opposite, in that he rarely delegated to senior officers anything that he felt he could do himself. Consequently, almost all the achievements of his officers are viewed within the context of Wellington’s own commanding presence. There was only one of his generals in whom he could place absolute faith and that was Rowland Hill. Affectionately nicknamed ‘Daddy’ or ‘Father’ by his troops, for the concern he displayed for their welfare, Hill achieved the rare distinction of being given independent command during phases of the war against the French in Spain, and amply justified the faith Wellington had in his judgement. Hill’s long career took him from Toulon and Egypt, through the Peninsular War to Waterloo, and ultimately to his appointment as commander in chief of the British army. This Leonaur edition includes two accounts of this remarkable military man and will be a valued addition to every library of the Napoleonic period.
Leonaur editions are newly typeset and are not facsimiles; each title is available in softcover and hardback with dustjacket.

In the field. Early on the 27th we heard of the returning of the French, and as the day advanced they approached nearer. By four in the evening their whole force was in sight, and continued moving forward, driving In our outposts, till they came within reach of shot from our lines, when they halted; and as night was coming on we did not expect any serious attack till the next morning. It was, however, scarcely dusk, when there was a heavy fire of musketry on my post, and a severe struggle on the part of the enemy to carry it, in which they did not succeed, and in about half an hour gave up the contest. On this occasion poor Fordyce was killed, my horse was shot, and I myself had a fortunate escape from the hands of a French soldier, who had got hold of my right arm, and would have secured me if my horse had not at the moment sprung forward. The Frenchman fired at me, but did not touch me.
Clement and Captain Currie were in the midst of the whole, but fortunately escaped. Nothing very particular occurred during the night: we continued in our position, and the enemy was near us. My post was on the left. General Sherbrooke in the centre, and General Campbell to his right, and all the Spaniards to General Campbell’s right. In the morning, when day broke, we observed the whole French Army drawn up in order of battle; the greater part of their force immediately opposite my post, which was evidently the point of attack, and which, if they could have gained, would have given them the day. Sir Arthur Wellesley came to it, and in about half an hour after the sun was up an immense column, since known to consist of two divisions of 7000 each, under Marshal Victor in person, moved on and attacked us. The fire was tremendous on both sides, but the French could not force us.
My horse was wounded early in the action. I got another from an officer. Shortly before the enemy gave up the conflict, I was struck by a musket-ball near my left ear and the back of my head. The blow was so violent that I was obliged to leave the field. I continued unwell the whole of the next day, and the next; I am, however, thank God, much better today. My hat saved my life; it has suffered as much as my helmet did on the 13th of March. Clement is safe; his horse was killed, and he had three musket-balls in him on the 28th. Currie is also safe, but had his horse killed under him. During the attack on me the enemy did not allow the remainder of the line to be quiet, for, with their numerous artillery, they kept up a constant and destructive fire on it, not regarding the Spaniards at all.
In about four or five hours the enemy’s fire slackened for a short time; they, however, afterwards began as serious an attack upon General Campbell as they did upon me, and, meeting with the same reception from him and the whole as they did in the morning, were fairly beat, and in the evening after dark went off. The loss on both sides is very great. Indeed, ours probably 4000, the enemy’s 7000. King Joseph was in the field, though not in the fire. When it is considered that the French force was double ours, and solely employed against the British, we may count the battle of Talavera amongst the most glorious that ever took place.
You may also like